Pruning young pecan trees is a necessity and, if done properly, can save farmers the hassle of pruning older, much larger trees, according to University of Georgia Cooperative Extension pecan specialist Lenny Wells.

Pruning should be done in the first three or four years of a tree’s life to train the tree to grow with one central “leader,” or trunk. If farmers don’t prune early, it can prove to be “a mess” later, Wells said.

Growers want pecan trees to have a central leader, one main trunk going up the tree from which the lateral limbs or main branches grow. A lot of trees naturally develop two or more main trunks. Pruning allows growers to prevent or correct that, he said.

“By training the tree, you’re keeping that tree more vigorous and keeping the tree’s growth more vigorous. You’re also getting rid of limbs that will be in your way if you try to come by with tractors and equipment in the next few years,” Wells said.

Young trees try to put on multiple shoots, which grow from buds on the trunk or branches. Many of these may develop at poor angles. If the angles are too narrow, those limbs would most likely break off during storms, so they would need to be cut off, Wells said.

The tip of the developing trunk should be pruned so the bud will continue growing the central leader. Farmers should remove buds that are spaced out as opposed to those clustered close together. Wells advises farmers to cut about an inch or so above the bud.

If a grower waits eight to 10 years to prune their trees, limbs that are producing nuts will need to be pruned off, he said.

Pruning is meant to remove excess growth that may not be needed or may be in the way of normal operations. It also removes limbs that are growing the wrong way on the tree.

Pruning can be done at any time of year, but most pecan farmers prune in the winter because fewer tasks need to be accomplished in the orchard this time of year. Pruning should begin when trees enter their second year in the field.

This practice benefits the tree by bringing it back to what the root system can support.

For trees entering their third year of production, remove limbs that are below head high or approximately 6 feet tall. If they aren't pruned away, those limbs will be in the way of equipment passing through the orchard in a few years.

Wells said it’s not too late to prune older trees, it just takes a lot more work. Growers are more likely to encounter big and small limbs protruding out from older, nonpruned trees. Those limbs need to be cut off. Low limbs, and those that create narrow angles on trees, also need to be removed. Depending on how large the limbs are, removal will likely have to be done with a chainsaw.

The goal of pruning pecan trees, no matter when the pruning is done, is to create a tree with one central leader and strong lateral branches or main limbs, Wells said.

For more information about pruning pecan trees from UGA Extension, go to blog.extension.uga.edu/pecan/2018/01/pruning-young-pecan-tree-videos/. 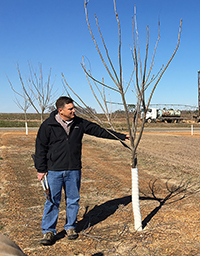