Economists from the University of Georgia’s College of Agricultural and Environmental Sciences recommend that Georgia farmers understand their production costs before planting next year’s crops.

Amanda Smith, a UGA Cooperative Extension economist in the CAES Department of Agricultural and Applied Economics, says prices for diesel, some chemicals and land rent have increased, while seed and fertilizer continue to be significant expenses of growing crops. Farmers need to be diligent in their record keeping and know how increased production costs combined with low commodity prices affect their bottom line, she said.

“It’s good business practice to be on top of your numbers and ask, ‘Am I losing money with this crop? Can I afford to pay land rent on these acres?’” Smith said. “If you can’t afford it, you may need to step away and look for an alternative.”

Along with UGA Extension peanut economist Adam Rabinowitz and UGA Extension cotton economist Don Shurley, Smith has produced a relative row crop production cost and expected net returns analysis for cotton, peanuts, corn, soybeans and grain sorghum for 2018. In UGA’s projections, cotton is expected to bring an average price of 72 cents per pound; peanuts could be $400 per ton; corn may be $4.15 per bushel; and soybeans may bring $9.50 per bushel.

These price estimates are based on harvest time futures contracts adjusted for expected basis, except peanuts. Peanut prices are a weighted average of expected contracts on limited quantities.

Based on UGA’s projections, soybeans, cotton and peanuts offer growers more return above variable cost per acre for both irrigated and nonirrigated farmland. When making year-to-year planting decisions, growers need to look at the returns above their variable costs, Smith said. In the long run, farmers also need to cover those fixed ownership costs.

One significant variable cost for some farmers is land rent. This past growing season, the average land rent for irrigated cropland in south Georgia was $206.25 per acre, according to the United States Department of Agriculture National Agricultural Statistics Service. This was an increase from the $202 average that landowners charged in 2016.

UGA agricultural economists urge farmers to look at the enterprise budgets, available online at www.agecon.uga.edu/extension/budgets, and adjust the cost estimates to reflect their production practices and what they anticipate for yield.

“For cotton, we budget for 1,200-pound yield. Some growers want to shoot for three-bale cotton, which is 1,500 pounds of cotton per acre. That’s going to require a different mix as far as fertilizers and other inputs. They should account for the higher costs associated with trying to get that higher yield of cotton,” Smith said.

“I was talking with one farmer and he said, ‘I’ve got over 10 years and 8,000 hours of use on a tractor. But the numbers aren’t there, I can’t buy a new tractor next year. I’m just going to have to keep repairing it and maintaining it the best I can,’” Smith said.

Other variable costs that remain a significant portion of production costs are fertilizers. The price for liquid nitrogen has risen since August of this year, though it’s not expected to keep increasing, she said. Phosphorus has leveled out and will likely stay around the same price. Costs for potash, a form of the element potassium, have gone up just over 7.8 percent from last year but have not shown a dramatic increase as in 2011. 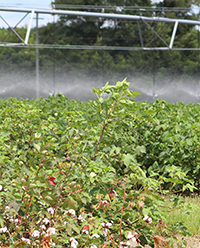