North Georgia landscapes have been either dusted or covered with snow this December. Now, homeowners are dealing with the damage that trees and shrubs suffered as a result of heavy, wet snowfall causing vulnerable branches to bend and break.

Standing outside during the snowfall, you could hear tree branches breaking and entire trees shattering from the weight of the snow. If you look closely at many of the branches that broke during the snowstorm, you’ll see that damage like breakage is often associated with certain defects.

One of the most common defects involves very long branches that are attached vertically rather than horizontally (commonly seen on Bradford pear and silver maple trees). As a general rule, branches that grow vertically are weaker than branches that attach at 45-degree angles or wider.

To prevent this type of damage in the future, University of Georgia Cooperative Extension recommends avoiding planting trees with the tendency to grow vertical branches near homes or power lines.

Of course, there are exceptions to every rule. If problems like wood rot, wood-decaying fungus or parasitic mistletoe compromise a branch, it likely could not handle the extra weight of the snow no matter which angle it is growing. Also, evergreen trees and shrubs accumulate more snow than those that shed their leaves.

Pruning is the best way to correct and remove any broken branches or limbs that were bent from the snow and ice. Winter is actually prime time to prune most plants if they need to be pruned. Trees and shrubs can be quite resilient to winter damage and past pruning mistakes.

In some cases, the open wound created by a broken branch or stem will be too large to heal. In those situations, it may be better to remove the entire tree. Major breaks or wounds to the trunk of a tree will invite other problems and shorten the life of the tree. Unfortunately, nothing can be done to amend these problems after the damage has occurred.

For most broken branches, make a clean cut back to the point of attachment. Whether you do the job yourself or hire a certified arborist, it’s important to make the cut at the proper angle. If you cut too deeply, making a flush cut, then you create a wound that will not close properly. If you cut the branch short, leaving a stub, then the wood will likely rot before the tree can seal off the wound.

The key is to leave the “branch collar” intact when making the cut. Most large branches have a visible swelling near the point of attachment, like the collar of a button-down shirt. Never cut below the collar.  If you make the cut at the proper angle, the collar should still be visible. This branch collar is where the tree grows new callus tissue to properly seal off a wound.

Don't use pruning paints, as current research has shown that they're unnecessary and may actually slow the cut’s healing. Make sure to keep tools sharp, and make clean cuts that will heal properly.

For smaller shrubs, remove all broken branches back to a major fork or a healthy bud somewhere along the branch. Now step back and assess the overall shape of the plant. If you are left with a lopsided shrub, prune adjacent branches to balance out the overall shape of the plant. More severe pruning should be done in late winter before spring growth occurs. Shrubs pruned in late winter or early spring will more quickly seal off pruning cuts and produce new growth.

Plants that produce flower buds on old wood may not bloom for several months or a year after major pruning. By the second year, they should flower at their normal time. 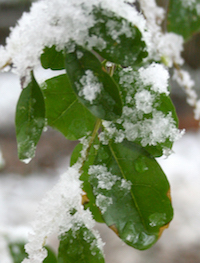 CAES News
When to prune landscape plants — and how to do it right 03/29/22 Ashley Brantley
Do you have a yard full of woody ornamentals? Are you unsure of when or how to prune them? With diverse growth habits and varying pruning requirements, it can be overwhelming to try to figure out when and how to prune each variety. Not pruning correctly, or at the wrong time, can lead to plants to become irregular in shape, more vulnerable to cold damage or pests, or less likely to flower at their full potential.

CAES News
Are your trees boys or girls — or both? 10/18/21 Kim D. Coder
Female flowers and female trees produce fruit and seeds. Male flowers and trees produce pollen. Making the correct choice of tree gender can be important. Anyone who has ever smelled putrid ginkgo fruit, washed mulberries off their car or sneezed at tree pollen should understand.

CAES News
Popular trees provide flower power but don't last the test of time 10/05/21 Paul Pugliese
Some trees naturally live longer than others but, ironically, many of the most popular landscape trees tend to be relatively short-lived. Although their flowers are quite attractive, Bradford or Callery pears are generally considered short-lived trees, and they are also highly invasive.
Subscribe for Updates