Whether used in fields where row crops are produced or planted in home gardens, cover crops are most often planted during the fall. They provide nutrients that will benefit the soil profile later. Cover crops may be particularly beneficial in pecan production.

Wells recommends planting crimson clover because it’s simple to distribute between an orchard’s tree rows, where grass typically grows. Growers don’t have to use equipment to cover the clover seeds because it naturally works its way into the grass and that’s cover enough, he said.

The clover grows during the winter months when pecan trees are dormant, blooms in the spring and then seeds out in May and June.

“Building up the soil is very important to preserving the lasting health of your orchard. The longer your trees live, the more nutrients they need over time. Having crimson clover grow in between your trees will help sustain the life of your orchard,” Wells said.

While crimson clover’s impact as a cover crop is significant, Wells believes that vetch will serve the same purpose. Vetch is a winter annual legume that excels in producing nitrogen. It tolerates a wide range of soil pH levels and controls soil erosion.

“A lot of orchards naturally have vetch that gets into the orchard. It’s also a legume like clover, so it’s going to be producing nitrogen as well. Some of the earlier work that’s been studied in Oklahoma shows that when you have a mix of clover and vetch, you’re actually getting a little bit more nitrogen. That’s a good situation as well,” Wells said.

Wells also recommends planting Durana clover as a cover crop. Durana is a white clover variety that is low-growing and produces all season long.

“Whether you’re using crimson clover or Durana clover, both of them are going to give you somewhere between 50 and 100 pounds of additional nitrogen over the course of a year. Something like that is what I would count on,” Wells said. “You would still need a spring application of nitrogen. Most of the nitrogen that you get from the clover crop is going to be available later in the season and more slowly released. But I will say the longer that clover is out there, the more that organic matter is built up and more nitrogen is released.”

Nitrogen is one of 16 essential plant nutrients. It is key to the growth of a plant and is responsible for the plant’s color. Glen Harris, UGA Extension soils and fertility specialist, encourages pecan growers to take soil samples during the winter in order to have a better understanding of their trees’ nutrient needs.

Pecans are a thriving industry in Georgia. According to the UGA Center for Agribusiness and Economic Development, Georgia’s pecan crop netted $361.3 million in farm gate value in 2015. 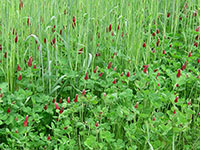