Georgia's first big crop of satsumas on track for 2018 harvest

Southern Georgia farmers growing ‘Owari’ satsumas are on track to harvest a bountiful crop of the citrus fruit at this time next year, according to Jacob Price, University of Georgia Cooperative Extension coordinator and Agriculture and Natural Resources agent for Lowndes County.

For the first three years of satsuma growth, producers remove the fruit from young trees to allow them to grow strong enough to support a load of fruit in the fourth year, which will be 2018 for many Georgia producers.

“If all goes well, next year should be our most productive year to date,” Price said.

There are currently 43,000 commercial citrus trees planted in Georgia, and the majority are satsumas. Fruit from the satsuma trees will be harvested in several Georgia counties this year: Lowndes, Irwin, Bulloch, Pierce, Clinch, Decatur, Thomas and Wayne counties. Satsuma trees were planted in southern Georgia beginning in 2013.

“Before Georgia, limited quantities of satsumas were primarily grown in Alabama, Louisiana, Texas, California and Florida,” Price said. “No one (in Georgia) was growing them, and I thought, ‘Why not?’ Our colder winter temperatures help the fruit develop a sweeter taste compared to traditional tropic, citrus-growing regions such as southern Florida.”

Price was instrumental in helping large and small farmers alike plant the first satsuma trees in Georgia. He started the process by meeting with industry leaders and potential satsuma farmers beginning in August 2013 to discuss the fruit’s potential value to southern Georgia. This year’s mid-March freeze negatively affected some of southern Georgia’s satsuma acreage.

Beyond trees for commercial production of satsumas, there are now trees growing in Lowndes County that are dedicated to two ongoing UGA research trials. One trial will help researchers evaluate whether or not newly developed rootstock produces a better quality, cold-tolerant satsuma. The second trial is an early satsuma variety trial in which early-ripening varieties are being compared in an effort to find the best performing variety for southern Georgia.

“A couple of the new rootstocks show potential,” Price said. “It’s still too early to tell, but they show promise.”

Price estimates that a farmer could produce a bountiful harvest from 144 trees on just 1 acre. In 10 years, those trees could produce 30,000 pounds of fruit.

(Julie Jernigan is an intern at UGA-Tifton.) 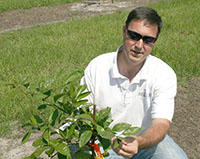 CAES News
UGA’s Dario Chavez spotlighted in Fruit Growers News 40 Under 40 class 08/06/20 Sean Montgomery
University of Georgia researcher Dario Chavez has been named to the Fruit and Vegetable 40 Under 40 Class of 2020 by Fruit Growers News. The prestigious honor places Chavez within a small group of young professionals who are making remarkable contributions within the industry.
Subscribe for Updates