University of Georgia natural resource economist Craig Landry will use his portion of a $1.5 million grant from the National Science Foundation (NSF) to study how the economy and the environment are affected when humans and coastal regions commingle.

“With the storm engine pumping the past few weeks, it’s as if Mother Nature is asking for us to get moving with this research,” said Landry, a professor in the UGA College of Agricultural and Environmental Sciences (CAES). “My goal is to answer fundamental questions about the future of coastal habitation.”

“We are heading into a critical phase where coastal communities will have to make important decisions about how they are going to adapt to the future,” said McNamara. “We are hoping we can inform some of that policy. The stakes are high for communities along every coastline, as the recent storm tragedies highlight. Our goal is to understand the complex dynamics at play along human-occupied coastlines. Rather than reactively dealing with a disaster event, we aim to proactively understand the dynamics that so often lead to disaster.”

As a UGA undergraduate in CAES, Landry studied management of coastal erosion in Georgia. His master’s thesis focused on coastal erosion policy on Tybee Island, Georgia. He completed his doctorate at the University of Maryland and worked in North Carolina, both areas that are part of the focus of the current NSF project.

“In Dare County, North Carolina, and Worcester County, Maryland, we are going to study property markets,” he said. “We want to know what people expect when they buy coastal properties and why they decide to sell. Is it because of high flood insurance costs, the volume of tourists, or is it just too expensive to maintain their property?”

Owning beach property sounds like a dream to many, but sometimes owners feel like it’s a nightmare. Those who install sea walls to fight erosion affect the coastal system and, if tourists are unhappy with the wall, they affect the economy, too, Landry said.

“For example, on Tybee Island, as a student, I used models to look at the benefits and costs of adding sand to help fight erosion,” he said. “By analyzing improvement in property protection and recreation and weighing those against the costs of adding sand, you can understand the optimal timing of this ‘renourishment’ and what the return to the economy will be in tourism.”

People like wider beaches, but they don’t like it when improvement work interrupts their beach vacation, he said.

Many factors play into the changes that occur on the coast, including storms.

“Changes occur on the coast through evolving landforms. Geologists study these phenomena and some claim that we should retreat from the coast.  Economists, on the other hand, often want to develop coastal land to build the tourist economy,” he said. “A sustainable management approach will balance these competing disciplinary perspectives.”

In the NSF-funded study, Landry is looking at the coastal system to find out how things change when human systems and the natural system come together. “For example, there are parts of Tybee Island that are on historical tax maps, but if you go there, they’re underwater. Coastal landforms are very dynamic,” he said. “Real estate development, infrastructure investment and other human institutions aren’t always designed to deal with changing environments.”

“People who buy houses along the coast sometimes have little information on the risks. And, if insurance rates are not risk-based, they have little signal of what the risks might be. Migrants from the North often don’t understand the risks of hurricanes,” he said.

Coastal cities and their residents pay the costs of maintaining homes, businesses and infrastructure while attracting the tourists who feed the economy.

“Some places along the coast are so at risk of eroding that they are pushed to embrace a phased retreat, but they don’t know when that will happen. Tourists could stop coming because of beach erosion, and homeowners could sell because they can’t afford insurance or they are worried about losing their investment,” Landry said. “This can create a tipping point where some locations become unviable.”

Landry will collect data to identify areas along the East and Gulf coasts that are at a high risk for failure.

The results of the team’s research will provide insight into how real estate markets respond to complex changes in environmental conditions, public policies, scientific knowledge, and individual attitudes and values.

Landry and his graduate students have compiled a survey of coastal residents and potential homebuyers that will be administered through UGA’s Carl Vinson Institute of Government.

Sharon Dowdy is a news editor with the University of Georgia College of Agricultural and Environmental Sciences.
Authors:
Sharon Dowdy
Experts/Sources:
Craig Landry 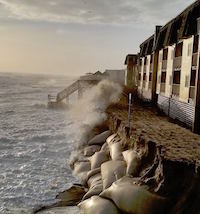