Fall in love with 'Patti Faye,' the most exquisite deodar cedar

Every day, as I come into the Coastal Georgia Botanical Garden at the Historic Bamboo Farm in Savannah, Georgia, and as I leave, I watch ‘Patti Faye,’ which is the most unbelievable Christmas-tree-shaped conifer for the Southern garden. I’ll admit I have been partial to the Japanese fir, Abies firma, as the most exquisite Christmas tree for the South, but not anymore.

The heritage of ‘Patti Faye’ is connected to Afghanistan, but ‘Patti Faye’ is really a Southern girl from Mobile, Alabama. In 2000, Ralph Rushing discovered a group of seedlings and he named it after his wife, Patti. When you have a classic conifer with outstanding performances in places like Mobile and Savannah, you know it’s a keeper.

‘Patti Faye’ is cold hardy through zone 7, which represents a wide swath of the country. If you live in a colder zone, you may want to try the ‘Shalimar’ deodar cedar, which is known for its extra cold-hardiness. ‘Patti Faye,’ however, has stolen my heart with its blue needles and horizontal branching habit.

Most deodar cedars have pendulous branching that is ever so graceful, but this is what makes ‘Patti Faye’ so incredible. Also called the “Himalayan cedar,” the deodar cedar does have the ability to reach 40 to 50 feet with a 30-foot spread.

Conifers, or cone-bearing trees or shrubs, are the ones that stand out when everything else goes brown or dormant. They are so important to the winter landscape and give us that needed evergreen structure. Of course, with ‘Patti Faye,’ this foliage or needles are steel blue.

Deodars are still mostly sold generically, which is OK, but keep your eyes open for the named selections like ‘Patti Faye;’ ‘Aurea,’ which is smaller, reaching to 30 feet and has golden yellow new foliage; and ‘Pendula,’ which has long, weeping branches and grows no taller than 10 feet. Don’t forget ‘Shalimar,’ which was released by the Arnold Arboretum and is known for superior cold hardiness for landscapes in zone 6.

Another variety we have in the garden that is a most pleasant surprise is ‘Snow Sprite.’ This variety is a dwarf, weeping type that seems like it would be happier farther north. Its origination is Vancouver, Canada, but it has done wonderfully in Savannah. This white-tipped deodar cedar reaches 4 to 6 feet in colder climates after 10 years, but we have reached that in less than four years in Savannah. I expect the weeping characteristics will now become more pronounced.

Deodar cedars are fairly fast growing for the first decade or two, reaching as high as 30 feet in the first 10 years. I think it is most beautiful at this stage. Between years 10 and 20, it will slowly broaden at the top. Older specimens generally show some top dieback, but don't let this keep you from experiencing 10 to 20 years of deodar cedar heaven in your landscape.

Deodar cedars perform best in full sun and are drought tolerant once established. This tree likes well-drained locations. Most deodar cedar cultivars will grow into large, handsome specimens that need plenty of room. You’ll want these in the back of a large landscape so they can be seen in their entirety. Otherwise, choose a variety for that perfect spot in your landscape. Follow me on Twitter: @CGBGgardenguru. 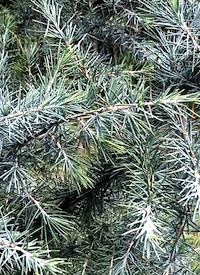 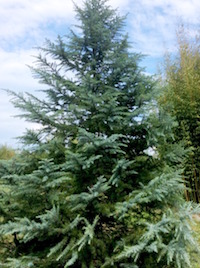