While many Georgia churches and government buildings welcomed Florida residents who fled their homes to avoid Irma’s wrath, the University of Georgia Tifton campus’ 129,000-square-foot Tifton Campus Conference Center functioned as a staging site for Georgia Power personnel who worked nonstop to restore power to residents in Tifton, Georgia, and surrounding areas.

The facility, which is made up of two auditoriums, four large ballrooms and a fully equipped kitchen, housed approximately 450 Georgia Power employees. They arrived at different times during the weekend in preparation for Irma, which came through Georgia as a tropical storm on Monday. Once the tropical storm blew through Tifton, the crews left to repair the damage the storm inflicted on the greater south Georgia area. They returned to the conference center at night to eat, shower and sleep before heading out again.

“Irma was a devastating natural disaster. As communities recover from an event like this, residents need to come together and help each other,” said Joe West, assistant dean of UGA-Tifton. “As part of the UGA Tifton campus, we were more than willing to offer our facility and staff to Georgia Power to serve their needs.”

John Ellis, Georgia Power staging site coordinator, said the conference center was the ideal location for personnel to gather, especially considering the lack of hotel vacancies in the area.

“(The conference center) has been incredibly instrumental in restoring service to southern parts of Georgia,” Ellis said. “There were zero hotels (in Tifton) because of the evacuees out of Florida and out of the Brunswick and Savannah, Georgia, areas. There was no way to house our crews here. We would not have been able to put anybody in the area until days after the storm.”

Storm Services, a company that specializes in the management of full base camp setups, supplied catering, mobile showers, and 500 cots and linens for the linemen and crews. Approximately 300 electric line trucks, bucket trucks and pickup trucks parked at the conference center over the weekend. The employees housed at the conference center included utility crews, tree-trimming and line crews, and engineers. They served Georgia residents as far southwest as Bainbridge and southeast as Waycross.

“Having the building to put (our crews) in, the kitchen facilities to serve them food and the large area to park around it made it one of the best sites I could have asked for, for something like this,” said Ellis.

He was especially complimentary of the conference center personnel who were on site around the clock during Georgia Power’s time in Tifton.

“I am very proud of how our conference center team came together during a time like this. When you’re given a chance to serve others at a time it’s needed most, it’s your responsibility to do so,” said Kim Rutland, conference center director. “Georgia Power needed a temporary home, and I am so happy we were able to provide one. The conference center staff did a phenomenal job working around the clock to keep the facility open during the storm.” 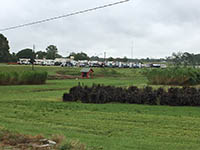