Some moths are stunning and could even be called beautiful

Over the last few years, I have waxed poetic about birds, bees and butterflies, but I have hardly given a mention to the lowly moth. I say “lowly” only in the numerical position of where most place the moth in a list of wonderful, natural things.

Oddly enough, moths brought great joy to my family in various locales of Georgia this summer. Can you believe a moth post has now moved into first place in terms of the number of hits on the Coastal Georgia Botanical Gardens at the Historic Bamboo Farm’s Facebook page?

I would like to think that the scarlet-bodied wasp moth climbing to No. 1 position on our Facebook page means something. Perhaps the great outdoors is still the place to be, or maybe it means the fight against “nature deficit disorder,” as Richard Louv so aptly called it in “Last Child in the Woods,” is being won. Probably it means that this is just one doggone beautiful bug.

The scarlet-bodied wasp moth looks like it should be Spider-Man’s partner. Its abdomen and thorax are the richest red you have ever seen. It has an iridescent blue middorsal line that shimmers in the sunlight and transparent wings with black venation. It looks like it would bite, sting or be poisonous in some manner, but its appearance is its defense mechanism.

Scarlet-bodied wasp moths are native to a tight band along the East Coast from South Carolina to Florida and a tight band in deep south Texas. They are native to Florida. Since initially spotting one on ‘Mystic Spires Blue’ salvia, we have seen them on sweet almond verbena and sweet autumn clematis. These two plants, which caterpillar larvae love to eat, are native climbing hemp plants in Florida.

If you live elsewhere, you will not see this moth, but a visit to your local botanical gardens or a watchful eye in your backyard will most likely give you the opportunity to take in other moths and butterflies that will thrill the soul and draw your children away from the television.

One moth that always elicits a “Wow!” is the luna moth (Actias luna). This huge moth is native from Nova Scotia west to Saskatchewan south to east Texas and every state east. The caterpillar’s hosts are white birches, sweetgums, hickories and persimmons. Oddly, the adults do not eat. They live about a week and their sole purpose is to mate.

There will be one group in the North and two to three groups in the South. If you have seen one, it may have been close to a porch light as they are attracted to light. If you have never seen one, put this on your bucket list. They are best seen at night or in the early morning.

Then there is the creature that many visitors claim is a bee. Another guest will say, “No, it’s a little hummingbird.” They love trying to photograph it until I step up to say it is a clearwing hummingbird moth (Hemaris thysbe). The visitors' faces often look crestfallen because they loved it until it was identified as a moth.

These moths are native in a large, diagonal sweep from Alaska and Canada to Oregon, then east to Maine and south to Texas through Florida. In other words, you have a pretty good chance of seeing these little, darting acrobats that do indeed look like small hummingbirds. They have a golden olive thorax and burgundy abdomen with wings that are mostly clear.

Their larval hosts are honeysuckles, snowberries, hawthorns and various Prunus species. Like the luna moth, there is one group in the North and two groups in the South. Here at the Coastal Botanical Garden, the adults seem to feed on just about everything. Pentas, Cannas, Brazilian buttonbushes and sweet almond verbenas seem to be a few of their favorites. This is one fun pollinator to watch. When you tell the kids it’s a moth, say it with enthusiasm and a smile. 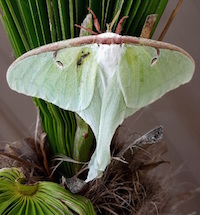 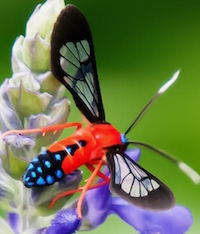 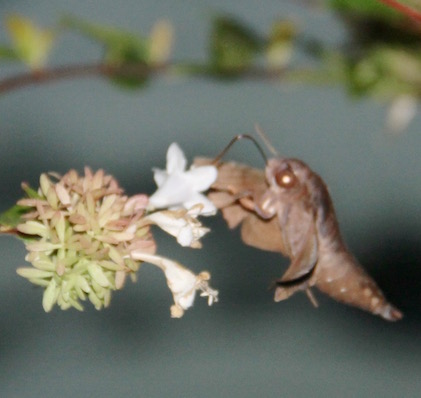