Growing up in Tifton, Georgia, Logan Moore knew that he would follow the family tradition of earning his associate degree from Abraham Baldwin Agricultural College. Remaining in his hometown and earning his bachelor’s degree in agriscience and environmental systems from the University of Georgia Tifton campus made sense, too.

After learning he could earn simultaneous master’s degrees from UGA and one of Italy’s leading research institutions, Moore decided to spread his wings even further. He will spend the next 18 months conducting research and taking classes for his thesis at the University of Padova, or Universitá Degli Studi di Padova (UNIPD), making him the first UGA graduate student to pursue this new dual master’s degree opportunity.

The new program is the result of faculty relationships that date back two dozen years, when Francesco Morari traveled to Tifton to conduct research for his dissertation. Morari is now an associate professor of environmental agronomy at UNIPD.

“Francesco and I became friends while he was in Tifton and, through the years, we’ve looked for opportunities to collaborate,” said George Vellidis, UGA professor of crop and soil sciences.

One of their earliest efforts dates back to 2004 with the establishment of the TransAtlantic Precision Agriculture Consortium that includes faculty from UGA, Auburn University and Mississippi State University in the U.S., UNIPD in Italy, the Technical University of Munich in Germany, and the University of Thessaly in Greece.

“Our first exchange program focused on undergraduate students studying in the U.S. or at one of the European universities for a semester,” Vellidis said. “Then, we began some internship exchanges for master’s (degree) students.”

In 2015, UGA and UNIPD signed a memorandum of understanding to offer a dual graduate degree in sustainable agriculture. The next year was spent studying all aspects of the programs at the two universities, from admissions requirements to required courses.

“In order for the students to qualify for a master’s degree from both universities, each university had to examine the courses that were being taken and ensure they covered the appropriate concepts and had the same level of rigor,” Vellidis said. “We also had to determine how the students’ faculty committees would be established to ensure there was balanced representation from the two institutions.”

Ultimately, details were ironed out and, in fall 2016, Moore was accepted into the program at UGA along with two Italian students who began their year of coursework at UNIPD. Moore, who moved to Padova in mid-May along with his wife, Casey, will be studying the brown marmorated stinkbug, a relatively new pest in both Georgia and Italy, but one that could cause millions of dollars in damage if not controlled. In the fall, he will take a course on plant breeding and continue his research under the direction of Professor Alberto Pozzebon, who studies sustainable pest management in orchards and vineyards. By the time he returns to UGA next fall, Moore hopes to have completed his research and defended his thesis.

Founded in 1222, UNIPD is considered the fifth-oldest university in the world. Located about 25 miles from Venice in northern Italy’s Veneto region, the city of Padova is much older. Padova traces its roots to 1183 B.C. In addition to scores of notable faculty and alumni – Galileo Galilei taught mathematics at UNIPD for 17 years, and astronomer Nicolaus Copernicus and Andrea Vesalio, the founder of modern anatomy, both studied there – the world’s oldest botanical garden, established in 1545, is also located at the university.

However, it’s not Padova’s storied history that appealed to Vellidis in pursuing the dual master’s degree program.

“The University of Padova is a top-ranking institution in many areas of research, including agriculture,” he said. “By studying there for a year or more, our graduates will develop a global perspective and understanding of agriculture. They’ll also have had the opportunity to live and learn in a place that has different ways of doing things. Those experiences will prepare them to explore a far broader range of professional opportunities.”

Although the dual master’s degree program is just beginning, it has already been recognized by UGA as an important contribution to the internationalization of the institution. Earlier this spring, the Richard Reiff Internationalization Award was given to Vellidis, Miguel Cabrera and Victoria McMaken for their efforts in establishing the degree. Cabrera is a professor and graduate coordinator in UGA’s College of Agricultural and Environmental Sciences (CAES) Department of Crop and Soil Sciences. McMaken is associate director of the CAES Office of Global Programs.

As the program gets underway, Vellidis hopes more UGA and UNIPD faculty will become involved.

“Now that it’s actually happening, we want to create more relationships with our counterparts,” he said. “You can’t sustain a dual master’s (degree program) without having faculty in both locations doing some of the same types of research.”

While the UGA master’s degree will be in crop and soil sciences with an emphasis in sustainable agriculture, Vellidis and his colleagues are committed to providing a broad range of research opportunities.

In the case of Moore, for example, Vellidis and Mike Toews, a UGA entomology professor who has studied the stinkbug for several years, will serve as co-major professors.

Moore said that he has few concerns about spending a year and a half abroad, despite the fact that his previous international travel has been limited to short trips to Mexico, Peru and the Dominican Republic.

“I’m not really nervous,” he said. “There are a lot of younger people in Padova who speak English and I’m looking forward to trying to learn Italian and finding my way around.”

Moore also agrees with Vellidis’ perception that earning dual master’s degrees will better prepare him for the future, whether that future includes earning a doctorate and pursuing a research or faculty position or returning to the family business in south Georgia, which conducts a wide array of crop testing and research for private companies. He also recognizes the added bonus that the majority of his expenses in Padova will be covered by scholarships. 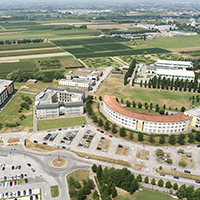 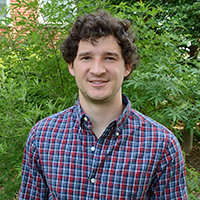