The lady’s slipper orchid looks to all the world like it would gobble up an unsuspecting pollinator. The pouch, called a “labellum,” is simply nature’s method of starting a pollination program. The pollinator does fly into the pouch and, most likely, finds little work in escaping, all the while either picking up pollen or making a deposit. This wonder of nature occurs in lady’s slipper orchids, and they will prove to be an enjoyable spectacle.

Cypripedium, which are terrestrial, have the ability to transform a garden into one of rare beauty. They are cold-hardy, and 11 species are native to the United States. One, the showy lady’s slipper, is even the state flower of Minnesota.

The Mexipedium, Selenipedium, Phragmipedium and Paphiopedilum genera are all tropical in nature. It is the latter that I am touting here, as it is considered to be among the easiest orchids to grow for the novice home gardener. They are so loved that it is believed that there are now 13,000-plus hybrids of this genus alone.

Despite the fact that the Deep South Orchid Society maintains the Coastal Georgia Botanical Gardens’ orchid house and it is mere steps from my office, it was the Savannah Orchid Show that caused me to be forever mesmerized by the lady’s slipper orchids. The one that first caught my eye was ‘Raisin Jack’ No. 5 x No. 7.

I’ll be honest. The names, especially the hybrids, are a little mind-boggling and confusing, to say the least. Their beauty, coupled with what seems to be an unending array of colors, shapes and textures, is not. This is an addicting group of plants for a potential collector.

A walk through our orchid house reveals orchids with varying sizes of pseudobulbs, which act as a water storage reservoir. The Paphiopedilum lady’s slipper orchid has no such device, meaning they need watering more frequently. Those grown in bark need water more often than those grown in moss. Leaching of nutrients is bound to occur, so feeding with about a one-quarter-strength, water-soluble balanced fertilizer is recommended weekly.

There is no place like an orchid show to get the whole family involved in one of America’s great pastimes. I assure you that your children and grandchildren will be enthralled as they learn about lady’s slipper orchids and the way pollinators fly into the pouch. A look at the American Orchid Society calendar of events will help you locate a nearby show.

All Georgia gardeners are invited to the 31st annual Savannah Orchid Show from Friday, April 28, to Sunday, April 30, at the Coastal Botanical Gardens. There will be vendors from several states that will not only be selling the best orchids, but supplies as well. I was stunned to see so many people carrying out bags, sacks, boxes and orchids last year.

Not only will you have a chance to see the beauty of the blooms up close, but you can learn the techniques of growing them and even get assistance repotting your own orchid. Although I have only been raving about lady’s slipper orchids, I assure you that there will be more species on display than you ever knew existed. 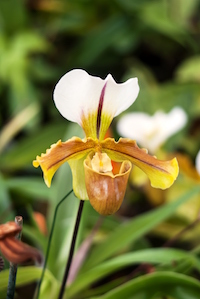 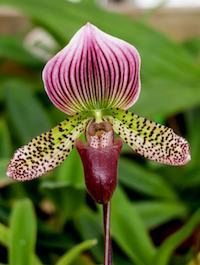