Georgia peanut farmers who plant a crop in mid-to-late April should make a decision on a second crop within two to four weeks of planting their initial crop. University of Georgia researcher and systems peanut agronomist Scott Tubbs helps farmers make that decision.

Tubbs’ research focuses on the economical feasibility of replanting peanuts.

“We want farmers to make those replanting decisions as early as possible, but you do have to give the peanuts enough time to come up (and be) fairly confident the majority of emergence has occurred. If you plant in relatively cool conditions, you could have a lot of variability in emergence,” Tubbs said.

Spotty rows, which are the result of improper plant stands, can significantly reduce yields. Tubbs stresses the importance of allowing the plants to emerge.

“In Plains, Georgia, a few years ago, I had a research trial that I assessed seven days after planting. It wasn’t long enough. I went back at about 14 days and we did our counts and started to consider things. After 17 or even 20 days, we looked at referenced rows and there were quite a few more that had come up in that timeframe,” Tubbs said.

Late-planted peanuts — those planted in late May — need to be checked for emergence between the two- and three-week window. Tubbs insists that checking at four weeks is way too late.

“The longer you wait, the bigger the initial plants (those planted in late May) get, and then they’re going to dwarf any replanted plants,” Tubbs said.

Replanting is necessary when farmers do not get an ideal plant stand.

Poor seed emergence can result from the germination percentage of the seed, handling or storage of the seed, and the previous year's weather conditions. The likelihood of emergence is lower if the seed receives little to no water.

Other factors contributing to poor seed emergence involve management conditions, like whether the peanuts were planted too early, the soil temperature was too low, or an herbicide was sprayed at the wrong time. Weather patterns can also impact peanut seed production.

“Even if soil temperatures are adequate, if a cold front comes through or we experience an unexpected rainfall event that cools off the soil temperature quickly, it can shock the seedlings and result in a poor stand,” he said.

If a farmer’s peanut field has two plants per foot or less, it is economically acceptable to replant, he said.

Peanuts are a high-value crop in Georgia, generating more than $684 million in farm gate value in 2015, according to the UGA Center for Agribusiness and Economic Development. 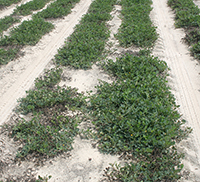