I was working on a magazine piece this week on nostalgia gardening. We tend to think of nostalgia gardening as growing something that is heirloom or antique. It is also represented in a plant that reminds you of another time or place. One plant that I hated to leave out was the emperor’s candlestick. Its Latin name is Senna alata, formerly Cassia alata.

Emperor’s candlestick is considered a shrub in the tropics, yet where I have seen them growing wild, they appear dwarfed in comparison to how they look in our landscapes. This is probably due to the shallow topsoil. Though the plant is seen in gardens as a beautiful flower, it is a valuable medicinal plant in developing countries. In Mexico and Samoa, it is used to treat snakebites. In other countries, it is used to treat herpes and venereal diseases, ringworm and digestive disorders. Butterfly lovers treasure it as a host plant for sulphur butterflies.

Emperor’s candlestick can be successfully grown as an annual just about anywhere in the country. Here in Savannah, Georgia, it is an annual flower and is as stunning as it gets from summer through frost. The candlestick plant is in the legume family, and even though it does not bloom until midsummer, the large, pinnately compound foliage provides a textural extravaganza even when flowers aren’t present.

Since it does grow large – up to 8 feet tall with the compound leaves stretching out 3 feet in each direction – you will want it close to the back of your border. I have grown them in beds where I had over a dozen, and while pretty, it was a little overwhelming. The way to go is probably with two to three plants in a mixed border. One of my favorite partners for emperor’s candlestick is the spicy jatropha, or Jatropha integerrima. Another terrific combination could include Cuphea ‘Vermillionaire,’ which has scarlet flowers and reaches about 3 feet tall and just as wide.

My one bone of contention or frustration with garden centers is that they usually do not have emperor’s candlestick early enough to allow us time to grow them into the 8-foot-plus range. Actually, they are now getting harder to find. Once you do start growing them, you are in business, because they produce long pods loaded with seeds. These dried seeds will give you the opportunity to grow them whenever you want. In recent years I have found seeds well priced through online shopping.

Once you start collecting seeds, store them in a dry location over the winter. Next spring, pop open the pods and plant the seeds about three-quarters of an inch deep in full sun in well-drained, well-prepared beds. I like to lightly scratch these seeds with sandpaper to help speed up my germination process. If you want to see your plants reach that 8-foot monolithic stature, feed them monthly during the growing season. Even though they are considered drought-tolerant plants, watering and mulching them keeps them looking lush and ever so tropical for your little corner of paradise. 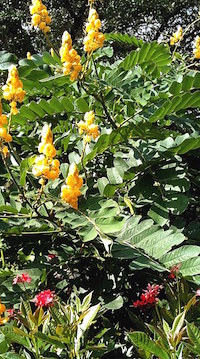