The cost of controlling plant diseases combined with the cost of irrigation continues to push Georgia watermelon growers to become more innovative and productive, according to University of Georgia Cooperative Extension vegetable horticulturist Tim Coolong.

The watermelon industry is extremely popular in Georgia – watermelons are grown on an estimated 20,000 acres per year, according to Coolong – but consistently making a profit requires constant innovation and hard work.

“The only way that growers are able to consistently stay profitable is to steadily increase productivity,” Coolong said. “We have plenty of challenges, including diseases such as fusarium wilt, phytophthora blight, gummy stem blight and anthracnose. Input costs have steadily increased, while many times, revenue has stayed the same. Therefore, overall profitability has been tightened up.”

During last year’s growing season, Colquitt County Extension Coordinator Jeremy Kichler said watermelon acreage was on the rise because of low prices for row crops like cotton, peanuts and corn. He predicts that this year’s acreage in Colquitt County will remain the same, primarily because peanut acreage is expected to increase.

To aid farmers in producing the most cost-efficient and high-yielding crop, several scientists at the UGA Tifton Campus, as well as county Extension agents, conduct watermelon research trials.

In his research plots, Coolong looks for different qualities in watermelon varieties, including varieties that produce quality fruit of consistent size.

“Total yield is not everything,” Coolong said. “Uniformity is often overlooked, but it is very important to a grower. Suppose someone has a market for one particular size of fruit. Then a variety that may be a high yielder, but produces highly variable sized fruit is not going to be useful to them, despite being at the top of the list in terms of yield.”

Because an estimated 95 percent of Georgia’s watermelon crop is seedless, the majority of Coolong’s research focuses on seedless watermelons.

While taste and texture are desirable characteristics that farmers look for in selecting a particular watermelon variety, Coolong says other traits may sway a farmer’s thinking.

“Consumers buy what tastes good, and farmers naturally want to grow what consumers buy. However, aspects such as disease resistance, yield and other traits are factors that the farmer must consider that the consumer doesn’t,” Coolong said. “Thus, when you talk about a farmer’s preference, it is really a combination of qualities, which they carefully weigh.”

According to the UGA Center for Agribusiness and Economic Development, watermelon’s 2015 Georgia farm gate value totaled $124.5 million. Watermelon accounted for 11.41 percent of all vegetables grown in Georgia. 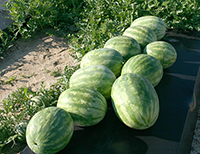 CAES News
Along came a spider 07/13/22 Leigh Beeson
Joro spiders are polarizing figures. If you live in Georgia, you’ve likely seen the massive-but-harmless spiders hanging between power lines or from the eaves of your house, their golden webs glistening in the sunlight. While some find them a fascinating effect of globalization, others don’t care how they got here. They just want them gone.
Subscribe for Updates