“Parsley, Sage, Rosemary and Thyme:” An old song for spring

After seeing some incredible mixed containers, I told my young horticulturist son that I had a vision of writing a column called “Parsley, Sage, Rosemary and Thyme,” kind of a play-on-words idea from Simon and Garfunkel’s famous album by the same name and, of course, the lyrics from the song, “Scarborough Fair.” The idea of my column is to encourage you to use these herbs in mixed containers.

But it appears my 26-year-old never heard of the artist, album or song. What has happened to the world? We spent weeks in Mr. Murray’s 1969 English class studying these songs and it was the best class ever, but I digress.

Just know this – remembering those four herbs as you design your mixed containers will allow you to create interest through foliage, add a touch of fragrance, dazzle with color from flowers, bring in a few butterflies and, shoot, freshen your breath, too. Lastly, if you are a culinary artist, then all of these are available for the picking.

Parsley is the most famous garnish on the planet. As a carnivorous meat eater, I would just as soon skip the parsley and add a couple of more ounces of New York strip. Speaking of New York, The Times ran an article that said there’s no way parsley freshens your breath, that the science is just not there. Of course, the Romans felt differently and it must have been famous at the Scarborough Fair. As a horticulturist, however, I love curly parsley as a 1-foot-tall filler plant in mixed containers. Its bright-green leaves just seem to bring out the color of companion flowers.

Sages are my favorite plants for gardens and mixed containers. Now we have to assume for lyrical purposes that we are talking the edible sage, Salvia officinalis. Of course other species are edible, including the heavenly scented pineapple sage, Salvia elegans. The Salvia officinalis excels as a filler plant in mixed containers, and the new variegated varieties do their part to add a little drama. This plant sometimes struggles in the high heat and humidity of the South when planted in garden soil, but always performs in mixed containers that drain freely. Drop it in with some ajuga at the front of your box or mixed container and you’ll have yourself a picture.

We may think of rosemary as the now-official Christmas topiary or the staple of the herb garden, and both would be correct, but it also makes a terrific center or tall plant in mixed containers. The aromatic foliage does not go unnoticed as you walk by. The green, fine-textured, needle-like leaves contrast with cool- or warm-season flowers as well as a boxwood or holly. Throughout Georgia, they are beginning their bloom cycle as they load up with icy blue flowers. A sprig or two may be just what you are looking for, whether you’re making pork or poultry.

Thyme is something I’ve generally used among rocks or stepping stones. The little, if not diminutive, creeping red thyme, however, is a wonderful spiller, creating interest with its tiny foliage texture, then follows up with its own version of “wow!” with flowers that may be rose, lavender, red or white. It’s like the engine that could, and you will be asking why you haven’t tried this before. It grows 3 inches to 6 inches tall and spreads to 18 inches.

Spring planting season is coming, albeit sooner for some of us. Herbs make wonderful component plants in mixed containers. If you can’t remember which herbs to use, let the old song remind you: parsley, sage, rosemary and thyme.

Follow me on Twitter @CGBGgardenguru. For more information about the Coastal Georgia Botanical Gardens in Savannah, go to www.coastalgeorgiabg.org/. 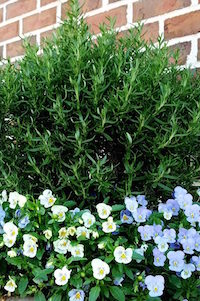 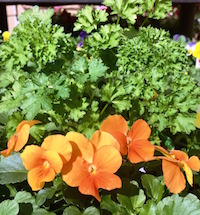