Heuchera are native to the U.S. and an award-winning perennial plant

I was hiking around Blue Ridge, Georgia, not long ago and came across a few terrific-looking heuchera, or coral bells, which I had only seen previously for sale in garden centers. All heuchera species are native to the United States, including this Heuchera villosa, which is native to the Southeast from Arkansas to Georgia and north to New York.

Heuchera was the Perennial Plant Association’s Perennial Plant of the Year in 1991, and since then, more hybrids and varieties, colors and variegations have been produced than we possibly could have ever imagined.

When you look at a plant tag, or a plant for that matter, it is next to impossible to identify which ones have DNA from a species native to your state or region. But then there are times when you think, “By George, there it is!”

A variety like ‘Caramel’ is labeled as a hybrid variety of Heuchera villosa. Now don’t get me wrong, I’m not saying everyone in the country should choose ‘Caramel’ or one of the other varieties that might be identified as H. villosa. But to me, it does give a clue that it might have a little more heat tolerance, since Savannah, Georgia, is far from ground zero for the heuchera.

Heuchera are considered perennial in zones 4 through 8 and tend to be evergreen in the warmer climates. The plant prefers moist, fertile, organic, rich soil that drains freely. In the landscape, promote sun to partial sun in the North and partial sun to shade in the South. If you are in the South, you must try them as a sunny, cool-season component plant, similar to what you might do for a flowering kale, cabbage or mustard. It will look attractive until around the end of June, which is long after the brassicas have bolted and flowered.

Treasure the foliage, but know that the plants produce tall, airy flowers in pink, coral, red or white. Many have foliage so colorful and ornately shaped that it will cause you to stop dead in your tracks, and you couldn't care less if they ever bloom. These spikes of blossoms do bring in hummingbirds. The plants reach 12 to 16 inches tall and should be spaced 15 to 28 inches apart or as recommended by the variety tag. Varieties like ‘Amber Waves,’ ‘Caramel,’ ‘Crème Brulee,’ ‘Georgia Peach,’ ‘Lava Lamp,’ ‘Mocha,’ ‘Palace Purple’ and ‘Peach Melba’ are just a tiny sampling of those heuchera that have mesmerized me the last few years.

No matter where you live in the country, you have a season where the heuchera can perform as a stunning filler plant in your mixed containers. That being said, it’s still rare in my travels for me to find them used in such an artistic endeavor. It is also still rare that I find heuchera in the landscape, as gardeners usually choose other materials.

Heuchera is an outstanding plant that deserves a place in the sun, partial shade or shade. Plant them along woodland trails, in front of shrubs. Great combinations can be made with wood fern or autumn fern. Let your artistic nature shine and use them with hostas. But if you are in the South, you must try them as a sunny, cool-season component plant.

Follow me on Twitter @CGBGgardenguru. For more information about the UGA Coastal Georgia Botanical Gardens at the Historic Bamboo Farm, go to www.coastalgeorgiabg.org. 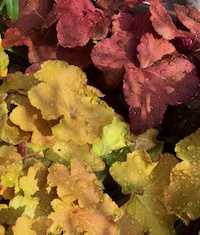 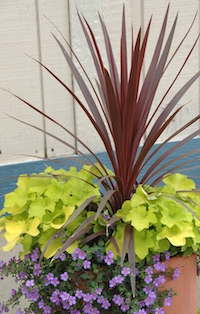