I was recently schooled, so to speak, on pansies and their partners as I visited Old Town, a Southern Living-inspired community in Columbus, Georgia. I’m a pretty good cool-season container guy, but everywhere I looked was foliage and cool-season color combinations I had never tried.

This community may be one of a kind, with nature trails and waterfalls, streets named after camellias like ‘Frank Houser’ and ‘Massee Lane,’ with new homes that look like yesteryear. There is an upscale apartment complex called “Swallowtail Flats” with individual units named for butterfly plants, like milkweed and plumbago. Cool-season color was growing everywhere, which must bring smiles to the faces of all residents.

It was evident that trailing foliage and flowers are equally paramount to designing mixed baskets and containers in the cool season. Throughout the Old Town community were planters that caught the eye with artistic spillers. One such plant was the ‘Orchid Frost’ lamium, or deadnettle, that dazzled with both its silver and green variegated foliage and lavender blooms. ‘Orchid Frost,’ known botanically as Lamium maculatum, is cold hardy from zones 3 to 8.

In some containers, ‘Orchid Frost’ was used with ‘Dash’ dianthus, pansies and sedum. In other areas it was partnered with pink snapdragons, thyme and the silverleafed ‘Carolina Sapphire’ Arizona cypress that created a most stunning thriller, spiller and filler.

Some of my favorite containers used ‘Goldilocks’ lysimachia, or creeping Jenny. While this is nothing new, it was the application I found intriguing. In white, street-side box planters, ‘Goldilocks’ tumbled over the rim in combination with dark-colored blue ‘Matrix’ pansies for a screaming, complementary color scheme. In other containers, ‘Goldilocks’ grew adjacent to ‘Lemon Ball’ sedum for a frenzy of golden chartreuse.

It was also apparent in Old Town that pansies, too, had become colorful spiller plants for cool-season containers. Whether it was on a private porch, patio or in street-side planters, both ‘Cool Wave’ and ‘Freefall’ pansies were making a colorful statement.

The horticultural designer also used interesting textures of lemon thyme, red creeping thyme with its tiny leaves and ground-hugging habit, and ajuga, or bugleweed, with ornate variegation. All of these made me realize I had gotten a little boring or complacent in my own designs, and maybe like you, have ignored the artistic opportunities these plants offer to the mixed container.

We can take some cultural tips from these containers, too. First, choose a container large enough to hold several plants and equipped with mandatory drainage holes in the bottom. If you are using the lightweight containers that look like terra-cotta or stone, you may have to drill your own holes. While you are at it, add four or five holes that are about three-fourths of an inch in diameter.

I felt the potting mix used in the containers and can tell you this was the key element to the long cool-growing season. Choose a good, lightweight, fluffy potting mix that already has controlled-release granular fertilizer mixed in it.

Choose containers large enough to incorporate a thrilling evergreen, like a juniper, lemon cypress, holly or topiary rosemary as the center plant. The designer of the Old Town containers not only used these, but also camellias.

Even though the temperatures will be much cooler during your pansy growing season, we must pay attention to plants’ water and fertilizer needs. Continue to feed regularly with a dilute water-soluble fertilizer.

Old Town is special, with flowers blooming 12 months of the year. Even if winter dictates a much shorter season for you, there are still ample opportunities for you to show your creativity with artistically designed containers around the porch patio or deck. To me, the cool season offers the best of container gardening.

Follow me on Twitter @CGBGgardenguru. For more information about the University of Georgia Coastal Georgia Botanical Gardens at the Historic Bamboo Farm, go to www.coastalgeorgiabg.org. 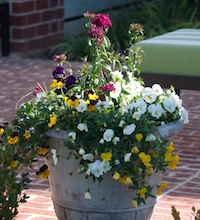 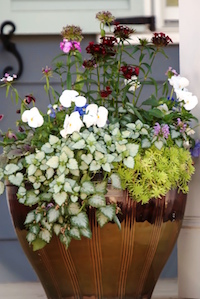 CAES News
Avoid transplant shock by planting trees and shrubs in the cooler months Posted on 12/16/21 by Paul Pugliese
Georgia gardeners will find the most success transplanting trees in the cooler seasons. But anywhere a tree or shrub dies within the first year of planting, there is usually a root issue involved. Spring-planted trees and shrubs are generally more stressed from summer heat because their roots are still underdeveloped during the first year. This results in excessive wilting, which causes well-intentioned gardeners to literally water their plants to death.
Subscribe for Updates