After five months of above-normal temperatures and dry conditions, almost 75 percent of Georgia is now experiencing some level of drought or abnormally dry conditions.

Because of the hot, dry conditions, the drought expanded and strengthened west of a line running from Screven County, Georgia, in the north to Ware County, Georgia in the south. The U.S. Department of Agriculture’s Drought Monitor shows an expanded area affected by extreme drought – the fourth drought level on the monitor’s five-level scale – grew from 11 percent to 40 percent of the state. Areas affected by exceptional drought – the most severe drought designation – expanded to cover 14 percent of the state.

Hurricane Matthew, which struck the Georgia coast the weekend of Oct. 8, provided rainfall along coastal Georgia, but the rest of the state saw extremely warm and dry conditions, with only one or two days of measurable rain.

Lake Lanier, north of Atlanta, reached its lowest point in the last four years last month. Twenty-two public boat ramps were closed due to low water. In Haralson County, Georgia, west of Atlanta, the Tallapoosa River dropped below the intake level for the water plant there. Water was imported for schools and other drastic water conservation measures were undertaken by residents.

Numerous forest fires occurred across the driest areas of the state and residents were encouraged not to start fires, especially at the end of the month. Some of the fires were spread by strong winds around Hurricane Matthew.

Winds from Hurricane Matthew also blew many green pecans off the trees in the southeast corner of the state. In Tattnall County, Georgia, alone about one-third of the pecan trees were toppled by the winds and will take years to replace. Cotton was blown off of plants to the ground and yield will be significantly reduced. In addition to agricultural damage, three people were killed in Georgia due to the hurricane, millions lost power and many people evacuated inland ahead of the storm.

After five months of above-normal temperatures and dry conditions, almost 75 percent of Georgia is now experiencing some level of drought.

Community Collaborative Rain, Hail and Snow Network volunteers along the coast reported daily rainfall amounts of 10 inches or more on the morning of Oct. 8 after the passage of Hurricane Matthew. A Garden City, Georgia, observer in Chatham County reported 13.86 inches that morning, after taking three separate readings of the gauge to keep it from overflowing. The highest monthly rainfall of 14.58 inches was measured south of Savannah in Chatham County, followed by 14.12 inches reported by the Garden City observer.

A number of daily high temperature records were set or tied on Oct. 29, 30 and 31 in Atlanta, Athens, Macon, Savannah and Augusta, and records were tied in Brunswick and Columbus on Halloween.

For more information, see the Climate and Agriculture in the South East blog at blog.extension.uga.edu/climate/ or visit gaclimate.org. Please feel free to email your weather and climate impacts on agriculture to share on the blog to pknox@uga.edu. 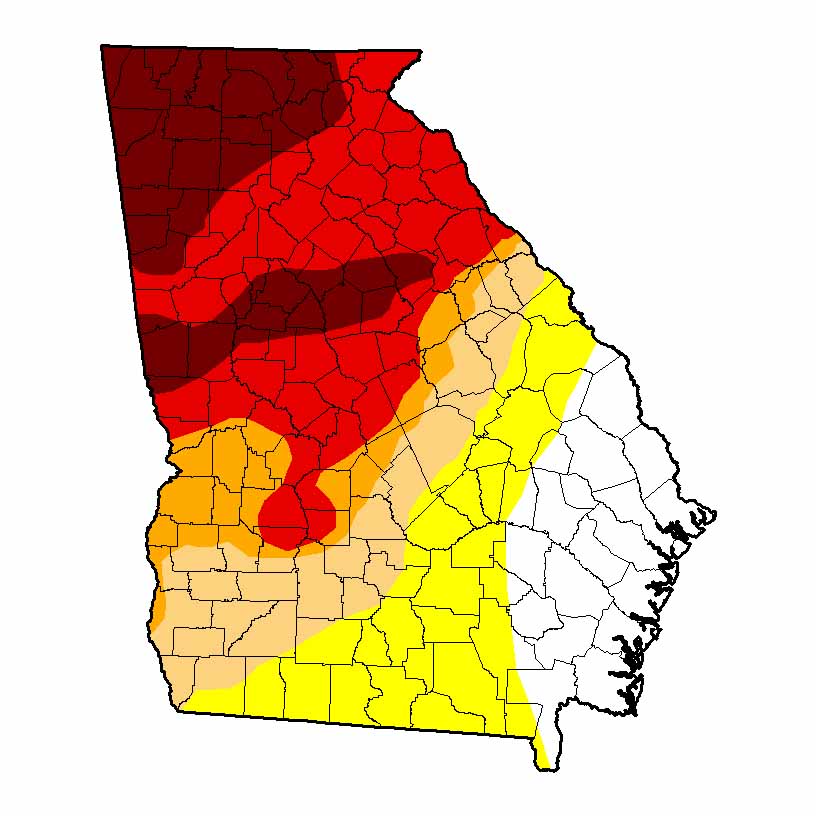