May brings drought in north Georgia, heavy rain in Savannah

In May 2016, most of Georgia suffered from a lack of rainfall, while record-setting rain fell in Savannah, Georgia. Drought conditions expanded statewide, and severe drought returned to the northwest corner of Georgia by the end of last month.

In the dry areas of the state, pastures, livestock and summer row crops suffered due to this lack of rainfall. Some farmers were waiting for rain to finish planting their dryland crops, and many corn farmers relied on irrigation to keep their crops healthy during the month.

In central Georgia and the coast, where wet conditions occurred, some fungal diseases were observed.

The highest single-day rainfall recorded by Community Collaborative Rain, Hail and Snow Network volunteers was a total of 8.65 inches, recorded south of Savannah in Chatham County, Georgia, on the morning of May 18. This total was followed by 7.59 inches, which was recorded on Skidaway Island, also in Chatham County.

Many other stations in that area received more than 5 inches of rain on May 18. The highest monthly rainfall totals were 14.34 inches, recorded in Newington, Georgia, in Screven County; 12.7 inches recorded near Marlow, Georgia, in Effingham County; and 10.15 inches recorded by a Savannah observer with the highest daily amount.

On the other end of the spectrum, one network volunteer in southwest Georgia's Grady County reported that he had received only 0.73 inches for the whole month.

Temperatures at most locations were near normal in May.

Climatologists are predicting that the summer will bring warmer-than-normal conditions. Dry conditions or drought may continue in northwest Georgia in June, although there are no trends determined for the summer period overall.

Cooler-than-normal water in the equatorial Pacific Ocean means that El Nino is almost gone and neutral conditions should be declared before a likely swing to La Nina later in summer. The Atlantic tropical season began with the development of Tropical Storm Bonnie in late May, and activity is expected to be normal to above-average this year due to La Nina conditions.

For more information, visit the Climate and Agriculture in the South East blog at blog.extension.uga.edu/climate, or visit our new website at gaclimate.org. Please feel free to email your weather and climate impacts on agriculture, to be shared on the blog, to pknox@uga.edu. 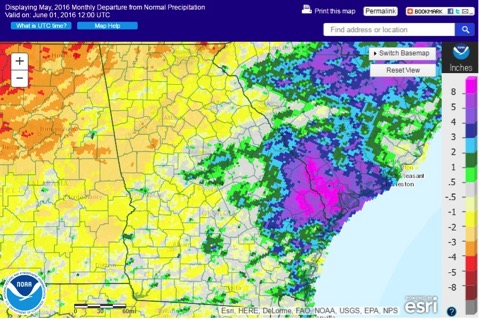