Spring-like December 2015 was one for the record books

2015 saw one of the warmest Decembers since Georgians started keeping records, and the month was also much wetter than normal.

The warm, wet conditions created havoc for Georgia farmers. The wet conditions caused saturation of soils in many places — a big concern for fruit tree farmers since soaked conditions put increased stress on the trees due to a lack of open oxygen pores in the soil. The warm conditions in December caused the lowest number of winter chill hours for fruit-producing trees and bushes in more than a decade, which could reduce the yield of peaches and other fruit in the coming season. These plants require a certain amount of time in the cold between October and February, or “chill hours,” in order to produce fruit.

Many farmers are hopeful that the return of seasonably cool temperatures in January will supply enough chill hours to salvage the state’s fruit-growing season.

Temperatures across Georgia were more than 10 degrees above normal in December 2015 at most weather stations. Numerous daily record temperatures and high minimum temperatures were broken. Most of the records were broken late in the month, from Dec. 24-31, which is unusual for high temperature records. Most of the stations in Georgia recorded their warmest December ever, according to rankings on the Southeast Regional Climate Center’s Perspectives tool.

Savannah, Georgia, broke or tied record highs on seven out of the last eight days of the month, and on many of those days, the high minimum temperature was also broken.

Rainy conditions under a persistent storm track that brought heavy rain to many areas covered the northern two-thirds of the state in December, while the stability of the track left southeastern Georgia counties high and dry.

The highest monthly total precipitation recorded by National Weather Service reporting stations was in Columbus at 17.38 inches, 13.11 inches above normal, and the lowest was in Brunswick at 1.35 inches, 1.29 inches below normal.

Severe weather occurred on three days last month. The most notable was a weak EF0 tornado, which blew down numerous trees near Culloden, Georgia, in Monroe and Upson counties on the afternoon of Dec. 24.

The outlook for January and the rest of winter shows a return to more normal wintertime conditions. Cold air is expected to move into the state in the next week and remain through much of the next two months, although daily values will vary. This should be a relief to farmers who need the chill hours to get a good yield for their fruit. El Niño is near its maximum extent but should continue to influence Georgia’s climate for the next few months before it wanes and likely swings to the opposite phase, La Niña, by midsummer, which could lead to dry conditions later in the growing season.

For more information, please see the “Climate and Agriculture in the South East” at blog.extension.uga.edu/climate/. For more on Georgia’s climate visit gaclimate.org. Please feel free to email your weather and climate impacts on agriculture to share on the blog to pknox@uga.edu. 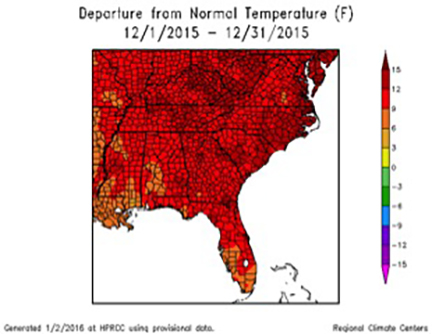