A fundraising opportunity for one University of Georgia Cooperative Extension office has turned out to be a key insect detection tool for local pecan growers in Dougherty County, Georgia.

James Morgan, Dougherty County Agriculture and Natural Resources agent, helps pecan producers in his county each year by making and selling pecan weevil traps. Weevils can be problematic for pecan growers because of the damage they inflict on pecan kernels.

Morgan is continuing a practice started by former Dougherty County Extension agent Rad Yager by making traps that can be attached to trees to catch the weevils. Yager saw a need in the community for a tool that monitors pecan weevils. The traps provide pecan growers with an indication as to whether weevils are an issue that needs to be eliminated.

“Weevils are usually more of a problem in older orchards, and of course, there are a lot of older orchards in the Albany (Georgia) area,” said UGA Extension pecan specialist Lenny Wells. “The traps let the producers know when the weevils are out and when they need to spray. That’s why the traps are so important, they let them know when those weevils are emerging. Otherwise it’s just kind of a guess.”

Using wire and wood, Morgan built 64 traps this year. Those traps helped to monitor 640 of Dougherty County’s 16,000-plus pecan acres. Farmers began setting weevil traps this year as early as mid-June to carefully monitor for weevils.

The traps, which cost $14 each, also generate funds for the UGA Extension program.

Considering the high costs that producers have to pay to spray for insects, the traps give growers the opportunity to determine whether the weevils are a problem and if they need to control them. If there are no more than one or two weevils in the traps, then the growers don’t need to apply pesticides.

“The fewer applications you have in your spray program, the less money you’re spending,” said Morgan. Before the trap was available to assist with monitoring, growers were spraying every year, whether they had weevils or not.

Dougherty County farmers have responded positively to Morgan’s traps. One producer, who farms 190 acres of pecans, ordered 20 traps this year. Morgan said that, as a result, the grower didn’t spray at all because the traps did not catch any weevils.

Morgan said that as many as three to five sprays may be needed to manage weevil populations. If the weevils are not treated, significant damage to pecan production can result.

“The weevil will lay an egg in the nut in the tree. Then the larvae hatches and feeds on the nut. The nut will drop to the ground, and then the weevil burrows out of that nut and goes into the ground. It may stay in the ground for a couple of years, developing,” Wells said. “It will emerge in August or September, after a heavy rain has softened up the dirt. The weevils will come out and climb up the tree (continuing the cycle). Sometimes they’ll even fly from one tree to the next.” 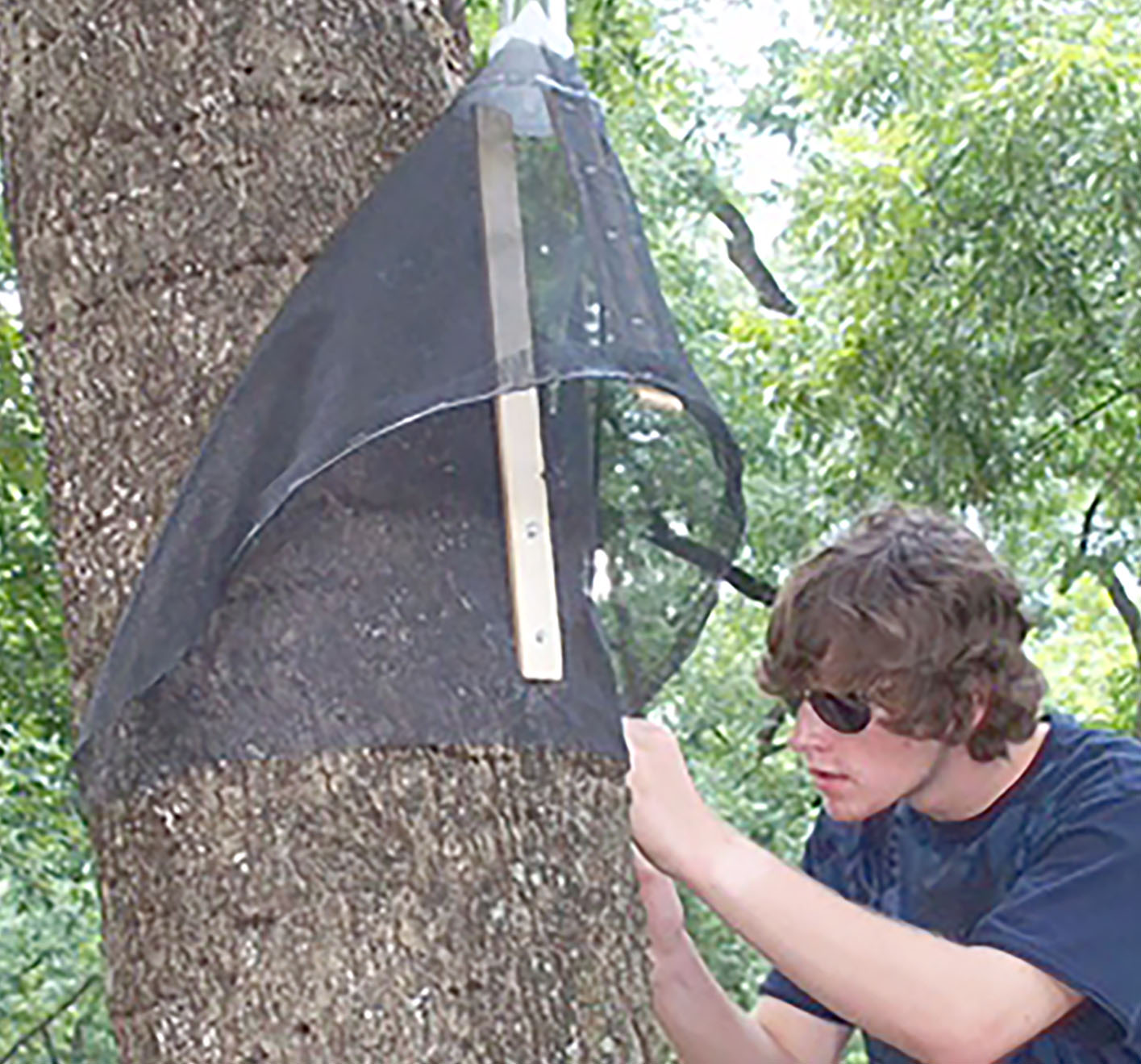