Georgia cotton farmers should consider rye as a cover crop

Georgia cotton farmers can benefit from using rye as a cover crop, according to scientists on the University of Georgia Tifton Campus.

Along with providing an added defense against glyphosate-resistant Palmer amaranth at planting, rye reduces thrips infestations significantly and could save farmers irrigation expenses.

University water resource management specialist Gary Hawkins is an avid supporter of a conservation production system, the process of using a high-residue cover crop in the non-cropping season to conserve the soil, retain soil moisture, provide a mat that helps with weed control and many other beneficial aspects to building a better soil quality.

A high-residue cover crop is one that produces a large amount of biomass. Crops like cereal ryes, millets or legumes are most often used.

Like all crops, cotton relies on water to grow and produce the yields that farmers need to make a profit. Prolonged dry spells can negatively impact cotton’s ability to produce, especially during periods when cotton needs water the most, such as during bloom.

University graduate student Seth Byrd is currently involved in a study to determine whether rye can reduce the amount of irrigation needed to produce cotton. Reduced irrigation would save farmers money, while conserving water.

“If we can retain water in the soil profile, then we can potentially cut down on some of the supplemental irrigation we need,” Hawkins said.

Cotton plants should benefit from rye’s ability to retain moisture in the soil. Byrd is studying the impact of supplying cotton that has been planted after a rye cover crop with just 75 percent of its usual irrigation needs. Instead of the 1- to 2-inch weekly application of water, Byrd is providing the plants with 0.75 to 1.5 inches per week.

“The biggest place it (the study results) has potential, though, is with dry land growers. With dry land, you have unpredictable rainfall, and you’re relying on rain as your sole source of water. If you hit a dry period at the wrong time, having this rye down could save some moisture,” Byrd said. “You can prolong that moisture being in the soil profile.”

The costliest weed Georgia cotton farmers encounter every year is the glyphosate-resistant Palmer amaranth, also known as pigweed. An estimated $110 million is spent annually to manage this weed that can grow as high as 10 feet tall.

Herbicides provide some relief, but university scientists fear that their overuse may lead to more herbicide-resistance problems. Palmer amaranth populations are so high across Georgia that, although 90-percent control is achieved by herbicides, it’s still not adequate control for cotton farmers.

The use of rye as a cover crop, to supplement herbicide use, has been proven to reduce Palmer amaranth populations even more. University weed scientist Stanley Culpepper said that rye reduces Palmer amaranth emergence by 60 to 80 percent, depending on the level of residue.

“The residue primarily blocks the sunlight needed for the Palmer to emerge, but also serves as a physical barrier,” Culpepper said.

Rye is rolled and terminated simultaneously just before the cotton season begins. Some cover crops die in the winter, but others need to be manually terminated through tilling, mowing, or applying herbicides. This allows the cotton to be planted and established without competing against Palmer amaranth or the cover crop.

Once rye is rolled and a timely residual herbicide is applied, there are approximately three weeks when the field is free of Palmer amaranth. The greatest threat of Palmer amaranth is during planting, when the cotton is getting established.

Thrips are tiny insects that stunt cotton plants, delay the plants’ maturity and lessen yield potential, but thrip impact can also be reduced through the use of rye as a cover crop. University entomologist Phillip Roberts says thrip populations are reduced because of the amount of residue on the ground. The more the soil is covered—specifically with rye—the greater the reduction.

“So what does this mean in terms of management?” Roberts asked. “When using the rolled rye system, we still encourage growers to use a preventative insecticide at planting for thrips. In most situations, though, this provides acceptable control, and there is not a need for a supplemental foliar spray.”

Thrips are cotton farmers’ most consistent and predictable pest. Thrips feed in the terminal bud of a cotton plant, causing malformation in the leaves and crinkling as they develop. In severe cases, thrips damage results in stand losses. 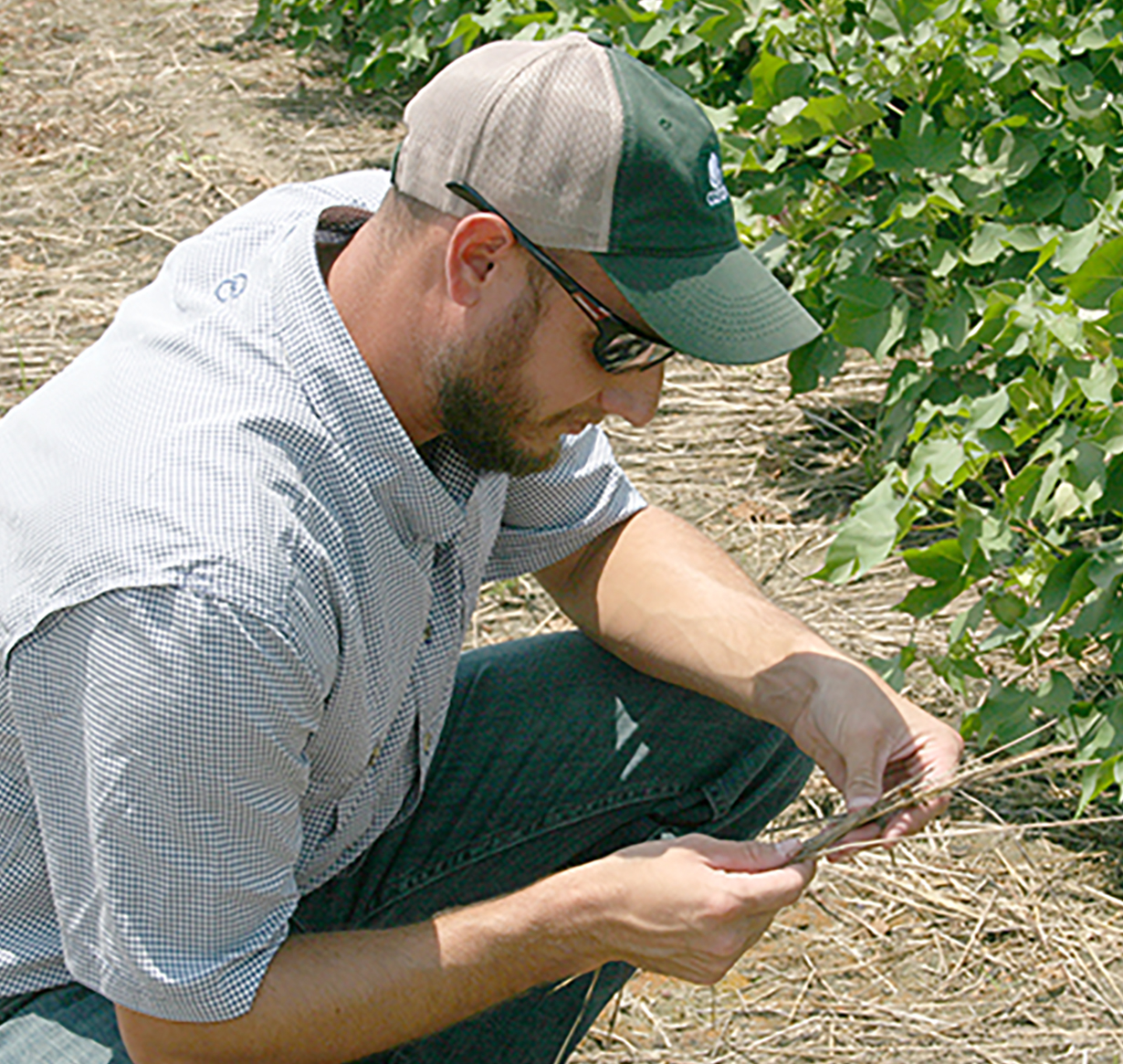 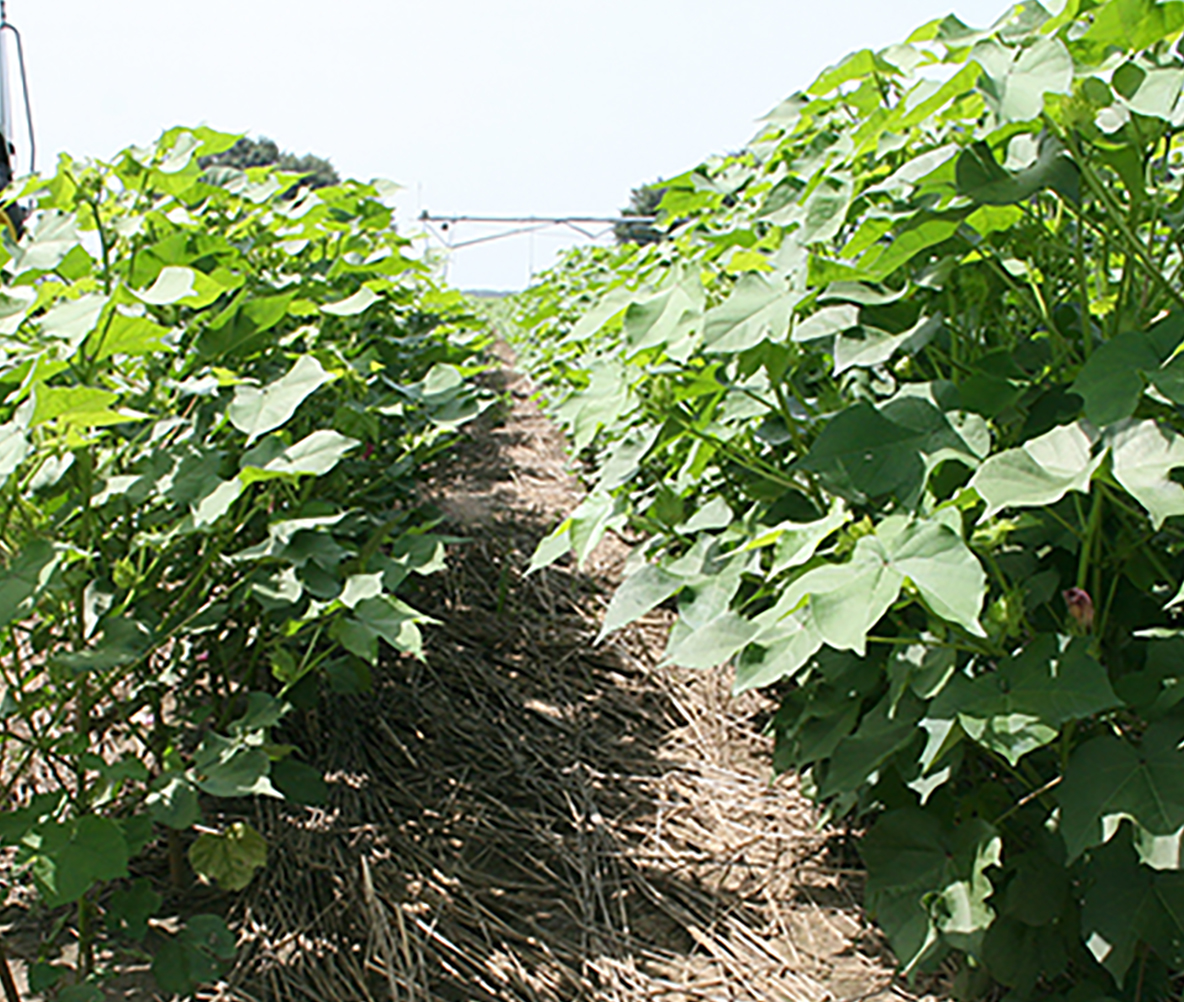