Warm and dry conditions during most of May allowed many Georgia farmers time to get in the fields and finish planting, which had been delayed by a wetter-than-normal April. The lack of rain left some areas with severe drought conditions, even at the end of the month when rains soaked most of the state.

Hay harvesting was ahead of schedule due to the excellent drying conditions, but dry conditions also caused problems with germination in some dryland peanuts and other crops and stressed some dryland corn crops.

The dry conditions caused the U.S. Drought Monitor to identify a developing region of severe drought in southern Georgia by the end of the month.

Many stations reported their driest start to the month on record, with little to no rain until the last week of the month. The dry start was due to a stalled weather system in the central and southern Plains, which caused disastrous flooding in that region but left the state dry. This system started to move to the east at the end of the month and brought most of the month’s rain on May 26-28, although scattered showers were observed mid-month, especially around Atlanta.

The highest single-day rainfall, recorded by Community Collaborative Rain, Hail and Snow Network volunteers, was 3.16 inches, observed near Fort Valley in Peach County on May 27, closely followed by 3.15 inches received northwest of Hawkinsville in Houston County on the same date. The highest monthly total recorded rainfall was 6.61 inches, observed near East Point in Fulton County, followed by 6.50 inches east of Atlanta in DeKalb County.

One daily temperature record was broken in May. Brunswick set a record with a daytime high of 93 degrees on May 19, surpassing the old record of 92 degrees, set in 1965.

Severe weather was observed on eight days during the month. An EF1 tornado occurred on May 26 two miles west of Warm Springs in Meriwether County, knocking down a number of trees.

For more information please see the Climate and Agriculture in the South East blog at blog.extension.uga.edu/climate/ or visit our new Web page at gaclimate.org. Please feel free to email your weather and climate impacts on agriculture to share on the blog to pknox@uga.edu. 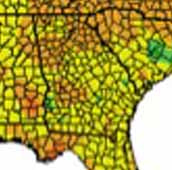 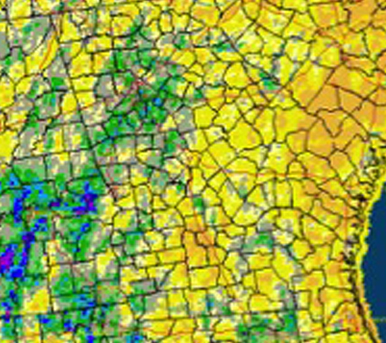