University of Georgia Extension is connecting vegetable farmers and impoverished families in Dougherty County, Georgia. The desired results are improved eating habits for this southwest Georgia community and a new market for producers.

As part of the Growing Food Connections program (growingfoodconnections.org), Dougherty County was chosen as one of eight Communities of Opportunity. The five-year program is funded by the United States Department of Agriculture.

“The goal of Growing Food Connections is to build local government’s capacity to strengthen food systems. We are looking to work with local governments to support the development and implementation of policy that supports small- and medium-sized growers and those who are underserved by our current food system,” said Program Coordinator Jeanne Leccese.

James Morgan, Dougherty County agriculture and natural resources Extension agent, was instrumental in Dougherty County being selected for the Growing Food Connections program after an extensive search. He submitted proposals, interviewed on behalf of the county and provided a plan of why the program would succeed there.

As part of the program, Morgan will participate in trainings and webinars designed to enhance his skills as a communicator for area producers, the local government and Dougherty County families. Growing Food Connections will provide technical assistance, regional workshops and will allow Morgan, and representatives in other selected communities, to network and brainstorm ideas to benefit their respective communities.

“We’re really excited to be working with Dougherty and see many opportunities that are available in Dougherty. We look forward to being able to network with people and develop relationships in Dougherty County,” Leccese said.

To help facilitate change in Dougherty County, Morgan has coordinated a steering committee, comprised of key agriculture personnel and county officials, who will meet and share goals and a vision for the county.

“The end result is really trying to tie that farmer to that consumer,” Morgan said. 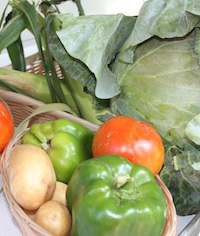