Georgia pecan farmers can learn the art of grafting during a clinic on Tuesday, April 21, hosted by University of Georgia Extension horticulturist Lenny Wells.

Grafting involves taking a branch from one tree and connecting it to the vascular tissue of another, Wells said. If a pecan farmer wants a Stuart variety tree, the farmer can insert a branch from an existing Stuart tree and graft it onto the seedling rootstock. Wells said pecan producers graft trees because nuts produced by a specific variety will not produce an identical tree to the parent.

“Once the connections are made through grafting, the tree becomes (the variety that) was attached,” Wells said. “There’s a science to it, but I think with grafting, it’s one of those things where there’s definitely an art to it. To be good at it, you have to have the touch. It just takes practice, and there’s a lot of different types of grafts you can do.”

The free clinic will take place at the UGA Ponder Farm in Tifton, Georgia, on Tuesday, April 21, at 10 a.m. The farm is located off of Highway 82 on Ty Ty Whiddon Mill Road.

Participants will learn about two different grafting types — bark and banana, or four-flap.

With bark grafting, a branch is taken from a tree the farmer wants to duplicate and inserted between the bark and the wood of the rootstock. Of the two methods, Wells said banana grafting is easier to learn how to do. Cuts are made on the bark and the bark is peeled down into four flaps, like peeling a banana. The wood is then cut inside out, cuts are made on the graft wood and the branch is inserted into the rootstock. The flaps are then brought back over.

“There’s still a lot of interest in it because there’s a lot of people who want to know how to do it just for the novelty of it. Some want to learn how to do it for their own operation,” Wells said.

CAES News
"Toothpicks" sure sign of Ambrosia beetles in pecan trees 03/19/20 Emily Cabrera
Georgia pecan growers should be monitoring for ambrosia beetle now, especially if they have planted new trees or their orchards include trees that are less than three years old. The tell-tale sawdust “toothpicks” sticking out of trees is a sure sign of ambrosia beetles boring into trees. 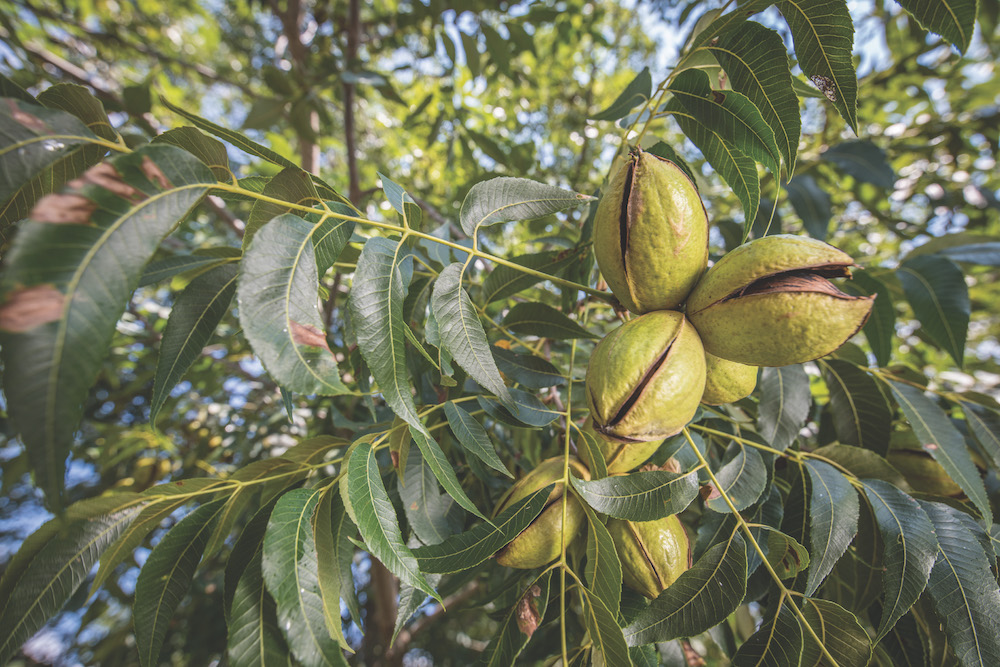