The new University of Georgia muscadine is golden and ripens early, making it an attractive choice for consumers and Georgia farmers.

Released by UGA College of Agricultural and Environmental Sciences horticulturist Patrick Conner, the ‘Hall’ variety tastes sweet, can be picked early and easily and produces an attractive color that consumers in the Southeast prefer. But for Georgia farmers to fully bank on its attractiveness, Conner hopes to improve the fruit’s appeal nationwide.

“Over the long term, we’re trying to figure out how to move this product into the marketplace,” Conner said. “Part of that problem is that people in the North just haven’t even heard of muscadines. It’s kind of regionally grown and regionally selling.” While living in Indiana, New York and Maryland, Conner never heard of muscadines either.

While the muscadine industry does not rival Georgia peaches or blueberries in volume, the quality of the fruit makes it a hot commodity in the Southeast. Muscadines are grown for either wine or the fresh fruit market, which is the case in Georgia, he said.

“For a small crop, it has really good flavor. It has a lot of beneficial nutraceuticals in it that are very good for you. We just need to get it out there and market it better,” Conner said.

The most recent UGA variety features characteristics that make it highly sought after. When breeding for a successful variety, Conner looks for a cultivar that produces large berries, has good flavor and ripens in the market window for Georgia, which begins in the last week of July.

‘Hall’ is one of the earliest varieties farmers can pick, beginning in late July. “The sooner farmers can get it in the market, the longer the period during which they can make money,” Conner said.

Muscadines are typically either purple and black or bronze. The ‘Hall’ variety is more yellow than most, which is what some consumers prefer, Conner said.

One of the most appealing characteristics of the ‘Hall,’ though, is it allows farmers to pick it cleanly off the vine, which isn’t the case with some varieties.

“Some muscadines, when you pick them, they’ll split open, and those you have to discard. You can’t pack them. Others will tear. This one is more than 90 percent clean on the scar. That means they don’t throw out as many,” Conner said.

On the downside, ‘Hall’ attracts more fungal diseases than the average purple variety. Diseases show up really well on the fruit’s bright color in comparison to purple muscadines and farmers must spray fungicides to control it. 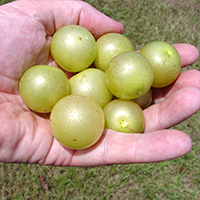