After a bone chilling November, Georgia saw warmer and wetter weather in December. The rain eliminated drought across the state, although some patches of abnormally dry conditions were still present at the end of the month.

The highest single-day rainfall, according to a Community Collaborative Rain, Hail and Snow Network volunteer, was 6.97 inches in Thomas County, east of Thomasville, on Dec. 24. Another Thomas County observer, just north of Boston, Georgia, recorded 5.75 inches on the same day, and a Grady County observer, near Cairo, GA, recorded 5.72 inches of rain. The highest monthly total rainfall was 11.79 inches, recorded by the Cairo observer in Grady County, followed by 9.77 inches recorded by the Thomasville observer.

Severe weather occurred in Georgia on four out of 31 days in December. Tornadoes struck on Dec. 23 and Dec. 29 in Lowndes County, including a strong EF2 storm (the F-scale ratings run from EF0 to EF5) that injured nine people two miles south of Valdosta on Dec. 29. An EF1 tornado was also reported in Pierce and Appling counties on Dec. 24, causing damage to roofs, power lines and trees.

The relatively wet conditions across the state improved soil moisture in many areas, aiding small grain crops and pastures and ending the moderate drought in southwest Georgia.

For the state as a whole, temperatures were well above normal. While final statistics are not yet available, December 2014 should be one of the warmest Georgia has experienced in 30 years.

Alma broke its daily high temperature record on Dec. 28 with a new reading of 80 F, surpassing the old record of 79 F from 2008. Savannah tied its record of 80 F on the same date, matching the record from 1982. The National Weather Service cooperative observer in Washington, GA, reported that December’s average temperature was the sixth warmest in that area in 107 years of record.

El Niño-like conditions are still present in the eastern Pacific Ocean, but have not reached the threshold for declaration of an official El Niño and are not expected to be the major driver of conditions this winter. However, the predicted climate for January, February and March still reflects the likelihood of below-normal temperatures and above-normal precipitation that are usually associated with an El Niño.

For more information, please see the “Climate and Agriculture” blog at blog.extension.uga.edu/climate/. Email your weather and climate impacts on agriculture, for sharing on the blog, to pknox@uga.edu. 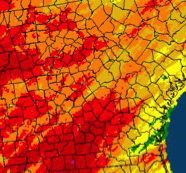