A University of Georgia plant pathologist is advocating nighttime and early morning fungicide application as an option to combat white mold disease, a perennially devastating disease for Georgia peanut farmers.

Because of its ability to produce oxalic acid and enzymes that can kill peanut crops, white mold disease is an annual concern, not only in Georgia but throughout the Southeast. The disease was not as widespread this year as in years past, said UGA College of Agricultural and Environmental Sciences plant pathology professor and scientist Tim Brenneman, but the disease’s impact will continue to be felt statewide.

To better optimize fungicide use, farmers may want to consider spraying in the early morning hours or at nighttime. Brenneman contends the conditions during both times of the day allow for the treatments to better reach the lower parts of peanut plants. Peanut leaves have four leaflets, and these fold as matching pairs when the sun sets. Application in the early morning or at nighttime makes it much easier for sprays to penetrate the plant canopy.

During the early morning, dew on the folded leaves is an additional benefit. When the fungicide is sprayed, the spray droplets land on the leaves and the vibration from the sprayer shakes the moisture and fungicide to the base of the plant.

“The water runs down the stems of peanut plants and ends up at the crown, and if it’s on a lower stem, it will go down a peg, which is exactly the tissue that you need to protect—the crown and the peg,” Brenneman said. “That’s where the disease usually initiates and causes the most loss. It’s taking the fungicide you’re spraying and channeling it down and focusing it on your infection sites. For a fungicide to work, it’s got to be at those infection sites.”

Brenneman said that when peanut farmers apply fungicides during the daytime, a lot of the product can get intercepted by the upper leaves that are exposed to the full sunlight. The lower leaves and the stems at the base of the plant are still vulnerable to white mold disease. During Brenneman’s research, he studied the effects of daytime spraying versus nighttime spraying and early morning spraying. Brenneman applied spray cards at different levels of the plant to see how, and if, the fungicide is evenly distributed.

For those farmers concerned about spraying at night, Brenneman said that some growers are doing it successfully, particularly if their tractors are equipped with GPS, which helps them stay aligned with the rows. Also, spraying at alternate times of the day will allow more working hours for the average farmer.

Since the conclusion of Brenneman’s study, the research has been published in multiple publications. Brenneman contends that this spraying technique, while not suitable for all farmers, would be most applicable in fields with more disease pressure. The key is to generate the maximum benefit from the fungicide being applied. 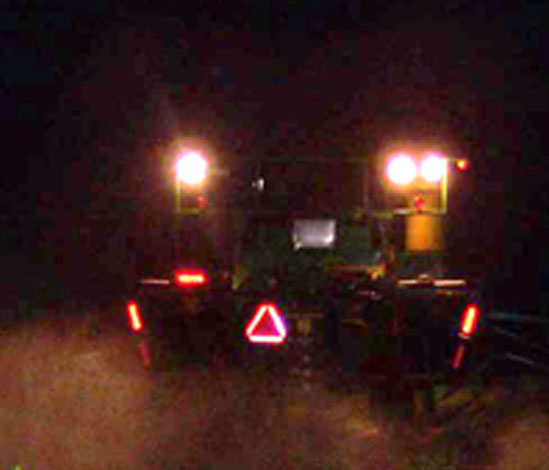