The lesser corn stalk borer, an insect University of Georgia Extension entomologists call the most devastating pest facing Georgia peanut farmers, produced scary results in the state’s dry-land crop this year. A repeat performance in 2015 could loom if another drought persists.

The lesser corn stalk borer thrives in drought-like conditions, which is what Georgia experienced in July and August. UGA entomologist Mark Abney said the insect is “sporadic” in terms of where its presence is most felt and the severity of its impact. However, in 2014 it was a major problem, especially in south Georgia.

“It bores into stems, and that’s bad. But it also bores into the pods, and that’s worse,” Abney said. “When it feeds on the pod, that’s pretty much the end of (the crop). Even if it just feeds on the outside of the hull, the damage it does provides an entry point for Aspergillus flavus fungus, which causes aflatoxin.”

Aflatoxin, a carcinogen, can be found on peanuts if an insect cripples the crop. The presence of aflatoxin, even on just one peanut, can severely downgrade a peanut load. Farmers try to avoid contamination by separately picking dry-land corners of irrigated fields, since that’s where lesser corn stalk borer infestations tend to be the worst. Mixing dry-land peanuts with irrigated peanuts increases the likelihood of a contaminated load.

“What you hope is the peanuts the insects fed on fall off the plant before you dig or they get blown out of the combine because they’re moldy and have no weight to them,” Abney said. “If an infestation is going on right at harvest and you’ve got some peanuts that were recently fed on, you could very easily end up with fungus spores in the peanuts.”

Chemical control is available, but for it to work it must be followed by rain, which was absent most of the summer. Abney questions whether applying the insecticide pays off for growers in the end.

UGA College of Agricultural and Environmental Sciences researchers tested some promising new insecticides in 2014, but more data is needed before new recommendations can be made.

Because lesser corn stalk borers prefer hot conditions and sandier soils, they are generally not a problem in irrigated peanuts. However, almost half of Georgia’s acreage — which exceeded 428,000 in 2013, according to the UGA Center for Agribusiness and Economic Development — are dry-land peanuts.

“It was huge this year. We were as dry as anywhere. They just thrive in that type of dry weather,” Hayes said. “It’s the worst I’ve ever seen them, and I’ve been working peanuts for several years now. They’re always a problem in spots. We always have a few in certain areas but nothing like we had this year.” 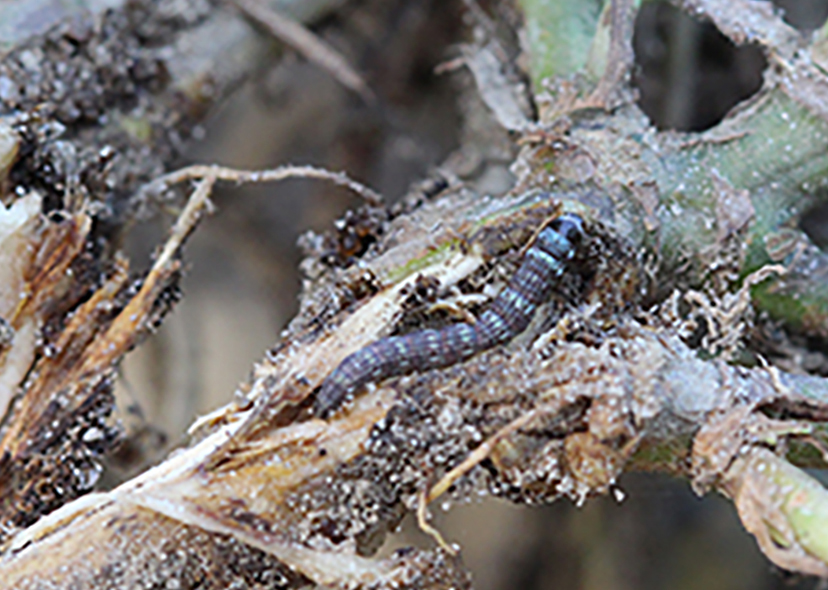