Drought decreased slightly across south Georgia in September as heavier-than-normal rainfall brought some relief to dry areas, but the rain hindered farmers working their fields. According to the National Drought Monitor, the percentage of the state covered by drought decreased from 20 percent to 15 percent.

The cool and wet weather associated with the rainfall across the southern part of the state delayed the harvest of peanuts and cotton, which was already behind schedule due to late planting. Quality levels in dryland crops are not good due to the arid conditions earlier in the summer. Hay production has also been hampered by cloudy and damp conditions, although rain did improve pasture and hay conditions earlier in the month.

Brunswick set a record-low maximum temperature record on Sept. 24. The weather station there reported a maximum for the day of just 68 degrees F, breaking the old record of 72 degrees F set in 1963.

Atlanta experienced the fourteenth driest September in its 136-year record. The last time it was this dry was 2005, when only 0.07 inches was recorded for the entire month.

Augusta had the second highest number of days – 14 days – with measurable rainfall in its historical record since 1885. This is the most since 1979, when 14 rainy days were observed. The record is 17 days, set in 1890. Savannah tied for its ninth highest number of rainy days with 15 days in 144 years. Savannah’s record is 19 days, also set in 1890.

The highest single-day rainfall from Community Collaborative Rain, Hail and Snow Network (CoCoRaHS) stations was 6.21 inches northeast of Hartwell in Hart County on Sept. 8. A Mitchell County CoCoRaHS observer northeast of Camilla and a Chatham County observer in Garden City reported 5.71 and 5.83 inches on Sept. 8 and 30, respectively. The highest monthly total rainfall was 11.02 inches, observed by the Garden City observer in Chatham County, followed by 10.96 and 10.43 inches from two observers south-southwest of Savannah, also in Chatham County.

The outlook for October shows conditions are expected to be relatively quiet and typical for October in Georgia. The jet stream is not strong, and weather systems are relatively infrequent, which makes October one of the driest months for most of the state.

This year the National Oceanic and Atmospheric Administration (NOAA) predicts a slight increase in the chances of above-normal temperatures (based on long-term trends) and equal chances of above, below and near-normal rainfall. The wild card in the prediction is the tropics, which continue to be unusually quiet, like many El Nino years, although no El Nino has been verified as of the end of September.

For more information, see the “Climate and Agriculture” blog at blog.extension.uga.edu/climate/. Email weather and climate impacts on agriculture to pknox@uga.edu. 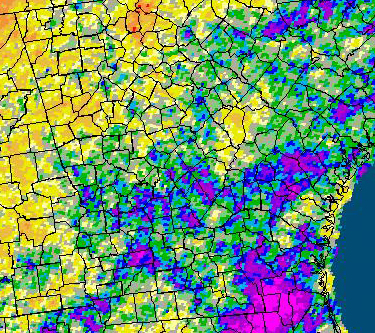