The annual Georgia Peanut Tour, held Sept. 16 to Sept. 18 in southeast Georgia, is a major attraction for the nation’s peanut industry, and attracts a number of international visitors.

“The international component of the Georgia Peanut Tour varies from year to year. Sometimes we have a big contingent from one country come through and bring farmers or bring consultants. This year we had nice diversity,” said Kemerait, who’s based in Tifton. “We had a group from Paraguay. We also had several countries from Africa represented as well as a few guests from Canada and some from as far away as Australia. It was a nice mix.”

One of those visiting for the first time was Agnes Mwangwela. A native of Malawi, Africa, Mwangwela attended the tour along with Joelle Kajuga, a native of Rwanda. The duo is studying in the United States as part of UGA’s Office of Global Programs. They are at UGA under the Norman E. Borlaug International Agricultural Science and Technology Fellowship Program. UGA’s Office of Global Programs is hosting their research, which focuses on alfatoxin, a mycotoxin that affects peanuts.

While peanut production approaches 5,000 pounds to 7,000 pounds per acre in the United States, Mwangwela’s homeland generates roughly 1,000 pounds. This year’s tour allowed both Mwangwela and Kajuga to see firsthand some of the new varieties being offered and new technologies being implemented around the country.

The tour also attracted Helmut Gorzen, a Paraguayan resident, who, along with his brother, owns a buying point and shelling plant.

“Every time I come here to the tour, I learn a lot about new technologies, new peanuts that they’re creating the seeds for. It’s very interesting,” Gorzen said.

While the Georgia Peanut Tour has a noticeable international presence, Kemerait reassures local peanut farmers who have concerns about providing aid to producers overseas.

“Having international visitors on this tour is a good thing. They are excited about what our farmers can do. It should not be seen as a competition or giving secrets away,” Kemerait said. “Many of the international visitors who attend the tour are from developing countries and these participants are interested in developing their peanut industry on a very small-scale basis. It inspires them to see what is possible with peanut production.”

Kemerait has firsthand experience in providing aid to poor farmers around the world. He has traveled to underdeveloped countries like Haiti and Guyana through his work with the federally funded Peanut and Mycotoxin Innovation Lab, formerly the Peanut Collaborative Research Support Program. In the past, during the earthquake in Haiti, for example, international farmers and agricultural leaders sought UGA’s help with humanitarian relief in impoverished countries.

“Most of the international agricultural leaders that come to [the peanut tour] are associated with aid and development work. You’re looking at subsistence farmers, small-scale farmers who are using maybe their only cash crop to buy pencils and buy uniforms for their children,” Kemerait said. “This tour gives them some ideas of what may be possible for them, not on the same scale, not with the same technologies, but what expectations could be with some developmental work.”

Though the United States is a major producer of peanuts, the vast majority of the crop is grown outside the country, he said. Varieties like Georgia-06G, a high-yielding variety bred by UGA plant breeder Bill Branch, help set the United States apart from other peanut-producting countries.

“The United States is a major producer, but not on the same scale as India or China. What makes us different is the quality of the peanuts,” Kemerait said. 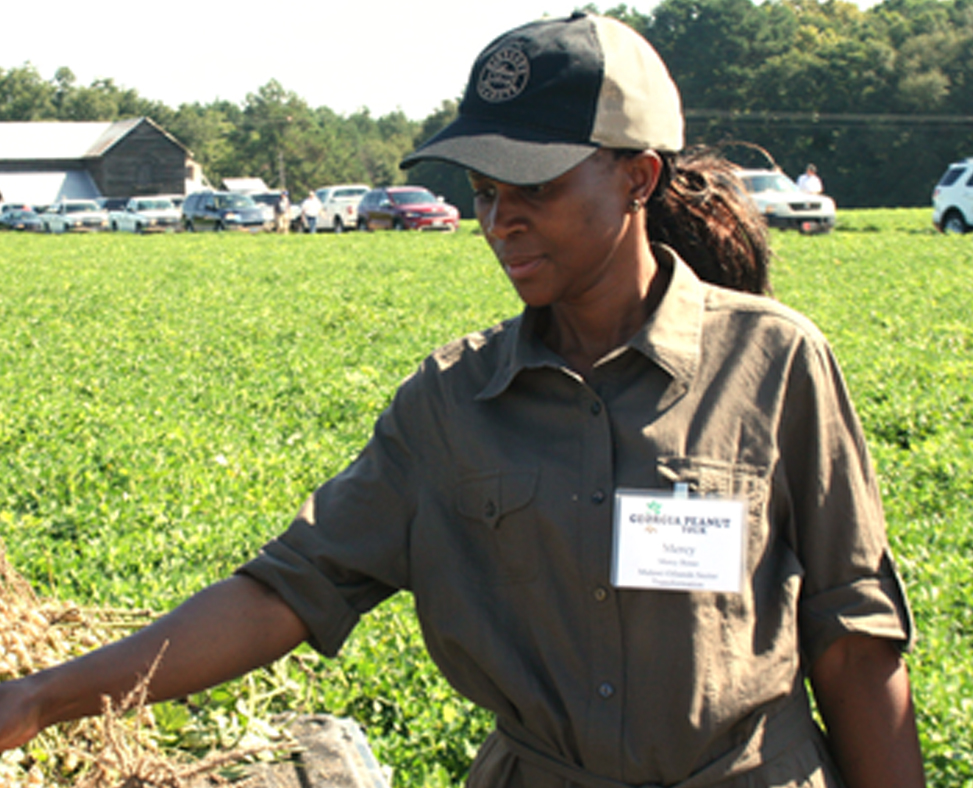