By Maggie Dudacek for CAES News

University of Georgia alumna Caitlin Hodges’ soil-judging skills took her across the globe this summer to South Korea, where she and the U.S. team brought home a first place win in the first-ever International Soil Judging Contest.

The road to this opportunity began almost a year ago, when Hodges and her seven UGA teammates traveled to Tennessee Technological University to participate in the Southeastern Region Soil Judging Contest. After placing third overall in Tennessee, the team went on to the national contest in Pennsylvania in April.

Fifth in the nation

The Georgia team placed fifth overall in national competition, and Hodges placed sixth as an individual. Hodges was then invited to be a part of the U.S. team at the first International Soil Judging Contest in South Korea in June.

After the competition, the U.S. team and coaches were invited to Washington, D.C., to meet U.S. Secretary of Agriculture Tom Vilsack. Hodges said the meeting with Secretary Vilsack opened her eyes to the importance of soil analysis and soil’s potential effects on the population.

“We had a roundtable discussion about soil science and its key importance to the agricultural system of the United States. [Secretary Vilsack] was very engaging and seemed genuinely interested in our ideas and experiences,” she said.

A love of soil and the environment

With an appreciation for the environment, Hodges recommends soil judging as a great hands-on approach for students who are passionate about crop and soil sciences.

“Anyone who is interested in the field should definitely look at the water and soil resources major. It was a great way to get into the field and study soil. That major introduced me to the world of soil judging,” said Hodges, who graduated with her bachelor’s degree in May.

Currently a graduate student in the university’s Odum School of Ecology, soil judging piqued Hodges’ interest at an early age.

“Concerned that I would be a ‘girly girl,’ [my dad] would take my sister and I on hikes and on trips to his landscape design projects. Those trips leant me an appreciation of the environment and a love for the outdoors,” said the Marietta, Georgia, native.

In high school, she especially enjoyed the soil unit in her Advanced Placement Environmental Science course.

“After that, I could not stop thinking about soil and knew that I wanted to pursue studies in the field of soil science,” she said. Once Hodges finishes her master’s degree, she plans on pursuing a Ph.D. in soil science and then stay in academia.

An academic activity performed by students to develop and demonstrate their knowledge of soils and potential uses, soil judging teaches students to identify properties and layers of soils and to classify the soils and interpret their uses, according to Bill Miller, a crop and soil sciences professor in the College of Agricultural and Environmental Sciences. Factors like soil wetness, slope of the landscape and depth to hard bedrock are important factors described during soil judging.

Aside from agricultural uses, soil descriptions are used in urban planning and development.

“The skills learned in soil judging prepare students for careers in soil sciences. These are exactly the same skills that soil professionals use in making soil maps, the basis for urban and agricultural resource planning. Both farmers and urban land developers need soil information to manage the resource in an effort to maximize potential use of the land and to prevent environmental damage to it,” Miller said. 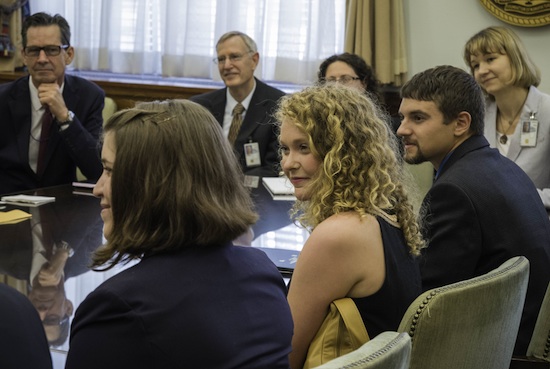