While 2013 gave Georgians a break from the state’s usual sweltering summer temperatures, summer 2014 is shaping up to be more of a standard-issue Georgia scorcher.

June’s temperatures were near to slightly above normal for the entire state. No temperature records were set.

Two daily precipitation records were set in June. On June 23, Columbus set a daily record of 2.17 inches, surpassing the old record of 1.10 inches set in 1980.

On June 24, Savannah reported 6.65 inches, more than doubling the old daily record of 3.29 inches set in 1884. This also surpassed Savannah’s all-time June daily rainfall record of 6.6 inches set on June 29, 1999. It was also the thirteenth wettest calendar day on record for Savannah.

Community Collaborative Rain, Hail and Snow Network volunteers reported their highest daily rainfall from Garden City in Chatham County on June 24 with 4.97 inches. Two other Chatham County observers, one in Pooler and one just north of Savannah, reported 4.72 and 4.71 inches, respectively, on the same day. The highest monthly total rainfall was 10.14 inches, observed 10 miles north of Ellijay in Gilmer County, followed by 9.77 inches measured west of LaFayette in Walker County and 9.60 inches set east-northeast of Helen in Habersham County.

Severe weather occurred in Georgia on 21 out of 30 days in June. Most severe weather reports involved wind damage associated with scattered thunderstorms. But, on several days early in the month, organized systems of storms called derechos blew into Georgia from northwest towards the southeast, causing widespread damaging winds. Observers documented one EF-1 tornado on June 8 in Troup County. It moved from northwest to southeast and damaged trees, cars and a greenhouse. The National Weather Service report on this storm can be found at www.srh.noaa.gov/ffc/?n=20140608_tornado.

Crops across the state generally did well in June, and progression of most crops was similar to last year. Regions that were wetter experienced more foliar diseases. By the end of the month farmers in some regions were concerned about the lack of rain and dryness in soil moisture, particularly at the surface.

July has an increased chance of warmer than normal temperatures, but equal chances for above, near or below normal rainfall.

For more information, see the University of Georgia Department of Crop and Soil Sciences Department's “Climate and Agriculture” blog at blog.extension.uga.edu/climate/. Please feel free to share the ways that weather and climate are impacting your crops or garden with the blog by emailing pknox@uga.edu. 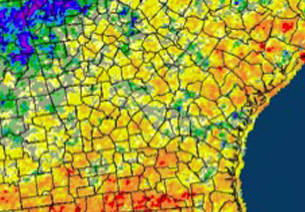 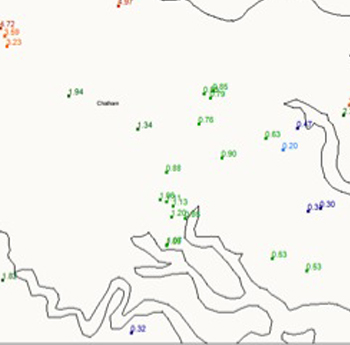