March in Georgia was fairly calm, but colder than normal across the entire state with temperatures ranging from between 2 to 4 degrees below average.

The relatively late cool temperatures may reduce the size of individual Vidalia onions this year, but the weather should not affect overall yields. Peaches received some frost damage late in the month due to temperatures that fell into the 20s, but it was not clear how significant the damage was at month’s end.

Wheat growers noted that powdery mildew was observed across the state, especially in the southwest, but it is expected to diminish as temperatures warm up and relative humidity drops. Some farmers held off planting watermelons and other summer field crops late in the month until after the cold temperatures passed.

Brunswick reported a record low daytime high temperature of 53 degrees on that date, as well, breaking the old record of 58 degrees set in 2013.

The highest single-day rainfall recorded by a Community Collaborative Rain Snow and Hail network volunteer was 3.99 inches near Lake Park in Lowndes County on March 17, with observers in Donalsonville and Valdosta reporting 3.95 and 3.91 inches on the same day, respectively. The highest monthly total rainfall recorded by a CoCoRaHS volunteer was 9.39 inches, observed east of Thomasville in Thomas County, followed by 8.63 inches measured by another Thomasville observer. No snow totals were reported in March, but snow flurries were seen in north Georgia on March 25, according to a CoCoRaHS observer there.

Because of the drier than normal weather, abnormally dry conditions returned to parts of Georgia, according to the National Drought Monitor. The drier soil helped farmers get into the fields to do spring field work, but they are concerned that the soil may be too dry to support germination if there’s no more rain before planting begins.

There was only one day with severe weather reported in March. This occurred on March 16, with wind damage to trees and power lines across southern Georgia. 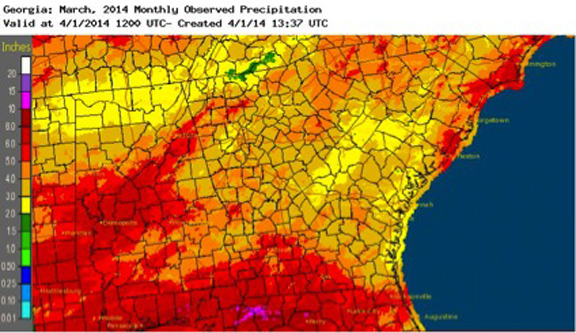