With a record-setting cold snap and snow-snarled highways in north Georgia, January 2014 went into the record books as one bone-chilling month.

After record-setting cold at the beginning of the month, many Georgia cities saw average temperatures between 3 and 8 degrees below normal.

A large ridge of high pressure over California and a deep trough of low pressure over the eastern U.S. allowed frigid Arctic air to reach the Deep South in January, with accompanying new low temperature records and snow in some areas.

Additional records for cold weather were set in Macon and Brunswick. Many schools closed due to dangerously low wind chills to protect school children who would be waiting at bus stops. The record-setting temperatures also led to rolling power outages in Athens on Jan. 7 due to extremely high demand for electric heating.

A second round of extreme low temperature records were set late in the month in Columbus, Macon, Augusta, Alma and Brunswick when daily maximum temperatures again only rose to the upper 20s to middle 30s during the day on Jan. 29.

Atlanta, Macon and Columbus reported record high snowfall for the day on Jan. 28 with 2.6 inches in Atlanta, 2.1 inches in Macon and 1.2 inches in Columbus, surpassing the old daily records of a trace set in 2005 at all locations. Snowfall in Metro Atlanta was generally 2 to 3 inches while the Athens vicinity received 1 to 2 inches.

Roads in the northeast mountains were closed on Jan. 21 due to snow and high winds at higher elevations. A teenage boy died after he and some friends fell through a frozen pond on Jan. 30 in Calhoun.

The most widespread impact of January’s winter weather was the traffic gridlock in Atlanta on Jan. 28. School and government officials abruptly closed schools and businesses when the snow started falling later that morning. The icy conditions, combined with several million vehicles entering the road system in a short time period, quickly led to a complete traffic standstill.

The Governor announced plans to convene two committees to identify why the existing system failed and to help guide future decisions on weather-related school and business closings. A National Weather Service report on the storm can be found http://www.srh.noaa.gov/ffc/?n=20140128winterstorm.

January was colder than normal, but at least it wasn’t soggy

The highest single-day rainfall from a Community, Collaborative Rain, Hail and Snow Network observer was 3.18 inches near Comer in Madison County on Jan.11. An observer near Danielsville, also in Madison County, reported 3.05 inches on the same date. The highest monthly total rainfall was 7.69 inches, observed east of Darien in McIntosh County, followed by 6.06 inches measured near Thomson in McDuffie County.

Severe weather was observed on Jan. 10 and 11, including a weak EF0 tornado that caused isolated damage near Waleska in Cherokee County on Jan. 11. The tornado formed in a line of strong thunderstorms that caused wind damage, downed trees and power lines and localized street flooding across northern Georgia. 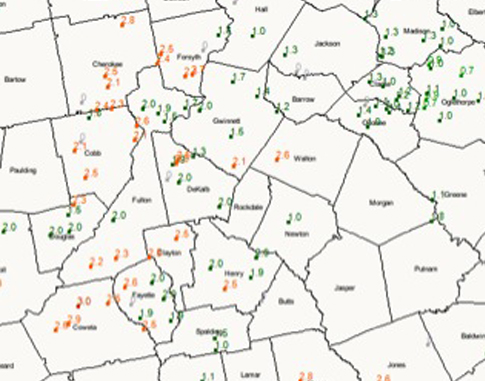