Georgia’s wet summer continued though out August in most parts of the state, and clouds and high humidity kept temperatures below normal for the month.

Many areas of the state have already surpassed their annual average rainfall levels with several months left to go in 2013.

The frequent rainfall was beneficial for crop dusters, who were still able to apply agricultural chemicals to fields that were too wet to work with tractors. Farmers reported trouble with corn and soybeans crops due to the cool, cloudy conditions and soaked fields. Farm stands reported their sales are down this year due to low yields and high costs of their products. They noted that the wet conditions have reduced sugars in some fruit, making the flavor suffer.

Insect populations have also thrived due to the wet conditions after two years of drought. Mosquitoes are still out in force. Yellow jackets have traded nests in the ground for aboveground quarters due to the saturated soils.

A number of temperature records were set or tied in August. In mid-August a wedge of cold air moved into Georgia from the northeast, down the east side of the Appalachian Mountains. This caused unusually cool conditions that are more often seen in October. The last time such a cold event occurred in August in Georgia was at the end of the month in 1986.

Warm humid air flowing north from the Tropics rose over the wedge of cold air, causing significant amounts of rain in the southern part of the state.

Macon also broke their record-low, maximum temperature on Aug. 16, with an observed temperature of 71 degrees. This broke the old record of 75 degrees set in 1994.

Rainfall records set across the state

Columbus had their wettest August in 66 years. Macon had the second wettest; Augusta had the third wettest; Atlanta had the fourth wettest; Athens had the sixth wettest; and Savannah the 11th wettest. All of the stations with the exception of Columbus have over 100 years of climate records.

Severe weather was reported on 12 days in August. A small tornado caused minor damage on Aug. 18 along the Alabama border in Heard County. Other damage was due to strong winds and small hail. Flooding led to road closures in northern Georgia on Aug. 7. 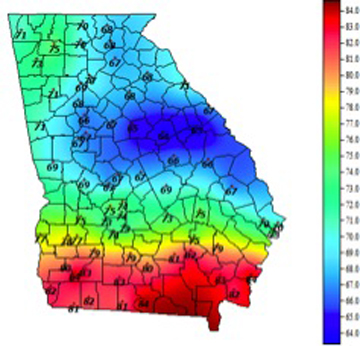 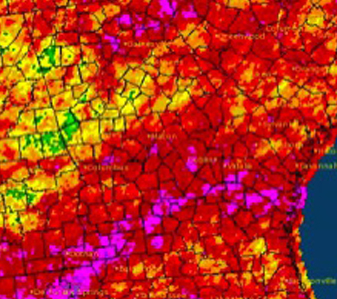