A silent peanut pest is eating away at profits and has Georgia producers concerned. The burrower bug can wreak havoc on a farmer’s peanuts without him even knowing.

The bug’s wrath was felt hardest in Georgia in 2010. Related to stinkbugs, the burrower bug has needle-like mouthparts that it sticks into the plant to suck out the juices. The insect feeds on the peanut kernel inside the pod, which decreases peanut quality.

“There’s a tremendous amount of concern among growers,” said Mark Abney, a University of Georgia peanut entomologist. “We can’t predict it. We can’t monitor for it right now very effectively.”

Abney, who started at the UGA Tifton Campus in July, plans to conduct research on the bug to develop effective management strategies for producers around the state.

Burrower bugs are difficult to monitor because they live below ground, and their damage often goes unseen until it’s too late, Abney said. In many cases peanut farmers carry their crop to the buying point, where it is graded, only to have the inspector point out the amount of damage.

If damage levels are high enough — greater than 2.5 percent — loads are downgraded for use in oil rather than the edible market. This results in a significant economic loss for farmers.

A major challenge to burrower bug research and management is the unpredictability of when and where it will strike. Not all peanut fields are at high risk to burrower bugs. The bugs thrive in dry conditions and in fields planted using conservation tillage.

If a farmer has irrigation and/or deep-tills his peanuts, the risk of burrower bugs decreases dramatically. Nevertheless, burrower bugs can and do sometimes cause damage in conventionally tilled, irrigated fields, Abney added.

“The real question is, ‘Can we predict if you will have a burrower bug infestation before the insect appears and does damage?’” Abney said. “The problem is, even in a county with a history of burrower bug damage, we can’t predict which fields are going to have them and which ones aren’t.”

This makes research difficult as Abney can’t plant a research plot at the Coastal Plains Experiment Station or in a commercial field and be confident he will get burrower bugs.

“That means we have to look for the insects in commercial fields, and when we find them we conduct our research,” he said.

The uncertainty associated with burrower bug infestations is a serious problem for growers who must decide if and when to control the pest.

In 2012, Abney was told about how one percent of peanuts delivered to a southeast Georgia buying point were affected by burrower bugs.

“While that might not sound like much, the problem is the damaged peanuts came from only a few farms. The growers who had problems had damage in almost their entire crop,” Abney said. “Overall, one percent damage may not be a huge deal, but if you happen to be the grower with heavy infestations, it could ruin you.”

Several south Georgia counties have reported problems with the bug during the past couple of years, he said.

Chemical options for controlling the burrower bug are limited, and insecticide effectiveness has been inconsistent. The use of granular chlorpyrifos has been shown to reduce burrower bug damage, but applications must be made preventatively in July.

Broad-spectrum insecticides like chlorpyrifos can reduce natural enemies and increase the risk of outbreaks of other insect pests. 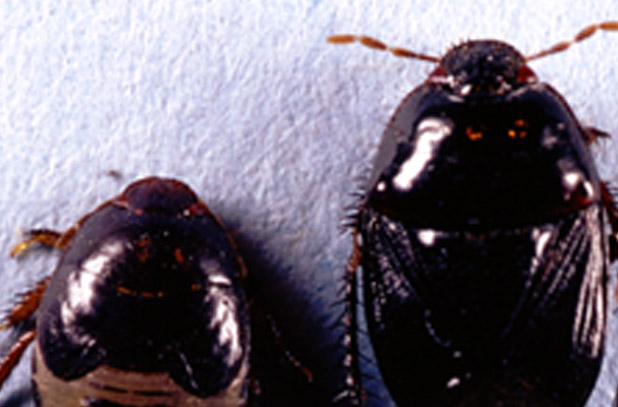