George Vellidis, a researcher on the Tifton Campus of the University of Georgia College of Agricultural and Environmental Sciences, reached this conclusion following a two-year study in 2010-11. Vellidis and his research team tested the on-board computer system for tractors on a private farm.

Auto-steer systems use GPS technology to help farmers guide their tractors through fields. For peanut farmers, this means more precise harvesting and fewer peanuts left in the ground.

The study was conducted in South Georgia on one farmer’s 180-acre peanut operation — 12 acres were tested in 2010 and 25 acres the following year. The test farmer saw substantial yield increases when using auto-steer to plant and invert peanuts compared to conventional methods.

Vellidis said the farmer would have achieved an economic gain of $27,851 in 2010 and $37,540 in 2011 if auto-steer had been used on his entire peanut acreage either of those years. The difference in economic gain was mostly a result of differences in peanut prices for those two years.

“GPS guidance of farm machinery has been adopted by increasingly larger segments of the farming community over the past decade because of the inherent gains in efficiency that it provides,” Vellidis said.

So how does it work? As the tractor is driven in a field, auto-steer gathers signals from a GPS and steers the tractor. Auto-steer creates parallel paths, which is ideal for farmers when planting and inverting peanuts. Auto-steer also enables the tractor to follow the exact same centerline created during planting when inverting the peanuts.

An inverter flips a plant upside down so it is on top of the soil with the peanuts facing upwards. The plants are harvested mechanically a few days later.

“It is very important that the tractor pulling the inverter passes as close as possible over the centerline on which the peanuts were planted. Otherwise, the inverter will cut off sections of the vines and those peanuts will remain in the soil and be lost to the farmer,” Vellidis said.

Auto-steer also allows farmers to watch their crops beplanted and harvested without worrying about veering off course. The farmer still needs to turn the tractor into a row and make a turn at the end of the row.

Auto-steer surprised the UGA research team when it greatly outperformed the human driver on straight and curved rows.

This new technology has been available for more than 10 years but has only recently been adopted by farmers in large numbers. “Peanut industry observers report that auto-steer is quickly becoming an essential tool for farmers in the southeastern USA who include peanuts in their crop rotation,” Vellidis said. He estimates 50 percent of farmers now use auto-steer, and some use it on multiple farm vehicles.

“The user-interface may be a little bit intimidating to someone not used to computer technology. But the manufacturers have made auto-steer very user-friendly so anybody can learn how to use it very quickly,” he added.

Vellidis says overall, auto-steer systems are very reliable, but like all technical equipment glitches can happen.

“Now, if it starts developing problems, you’re pretty much stuck and will need to rely on tech support to resolve your problem unless you’re a techy-kind of person.

Auto-steer systems cost between $22,000 and $25,000. Based on his research, Vellidis says producers who farm at least 200 acres of peanuts using auto-steer can pay for the system in one year with just the extra yield they gain on peanuts.

“Auto-steer systems also provide additional economic gains whenever they are used for other farm operations and those gains also add up,” Vellidis said. 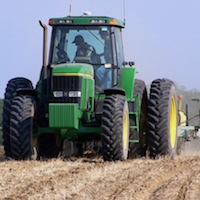