Technology to play key role in future of agriculture

Farmers and technology experts from across the Southeast got a glimpse of the future last week at the Atlanta Chapter of the Association of Unmanned Vehicle Systems International’s Unmanned Systems in Agriculture Conference at the University of Georgia Tifton Campus Conference Center. Unmanned vehicle developers hope the new technologies will make farming more cost effective, and better for society and the environment.

“This unmanned aerial systems conference is really important because it’s highlighting existing technology, which can have immediate impact on agriculture,” said Joe West, assistant dean of the UGA Tifton Campus. “It’s demonstrating how unmanned aerial systems, which were developed with military applications, are transferring that technology over to agriculture where we’re essentially using those systems as platforms to carry technology to monitor crops and many other things; disease, drought, mineral deficiencies.”

Unmanned autonomous systems are becoming more common place as a tool for farmers, according to the Association of the Unmanned Vehicle Systems, also known as AUVSI.

Scientists are already using remote-controlled helicopters to detect diseases in farmers’ fields. Unmanned helicopters are also popular in Japan where more than 2,300 are used to spray rice fields and keep a close watch on the health of crops.

“Agriculture is very technology-oriented,” West said. “We’re very advanced from the science standpoint, technology standpoint, even business standpoint. It’s going to be another tool that lets us reach further, make decisions better and then respond quicker.”

One of the remote-controlled helicopters at the conference Thursday, the Aerobot 100, was designed to be used as an eye in the sky for the military, police or fire department. With a camera attached on its bottom, the Air Robot 100 allows its user to get a bird’s eye view of areas that are otherwise inaccessible.

For example, it would provide another set of eyes for the fire department to see how many people are trapped in a burning building. Producers who farm large fields could use the machine to inspect crops for insect or disease damage. Using the Air Robot 100 could help farmers identify an emerging insect or disease problems before it’s spotted by crop scouts.

“This is not specifically an agricultural UAV (unmanned aerial vehicle) but it has a lot of potential. I think it’s representative of the class of UAVs that people who may come to this conference wouldn’t have known about,” said David Price, a senior research technologist with Georgia Tech. Price operated the Aerobot 100 with a remote control that also displayed video of what was being filmed.

More and more universities around the country are studying unmanned aerial vehicle technology in agriculture. Highlighted by AUVSI, Virginia Tech uses unmanned aerial vehicles to locate microbes in the atmosphere that could lead to plant diseases. The research conducted will be used to create an early warning system for pathogens.

As fewer people work on the farm, adopting these new technologies could play a key role in the success of farms everywhere.

“It makes our farms more efficient. It makes them more sustainable and environmentally friendly,” West said. “Change is difficult. Adopting new technologies is difficult, especially if you’re older and haven’t been exposed to technology as much …

“Adoption is more difficult. However, there’s one thing that makes adoption easy, and that’s if it makes money.” 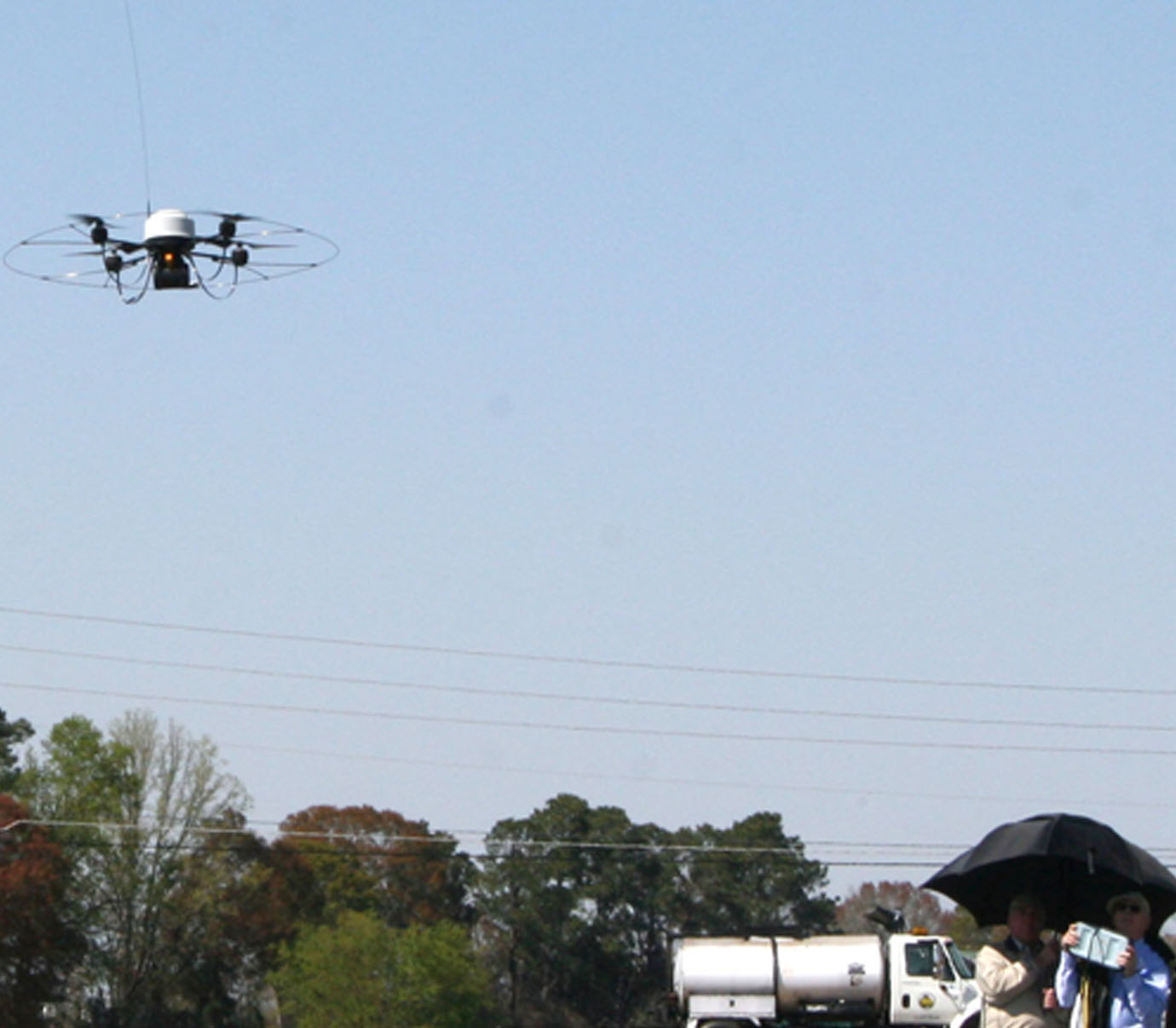