Georgia Vidalia Onion growers are ready for Mother Nature to turn off the tap. Record rainfall has dampened their crop, prevented them from getting into fields to take care of it and put it behind in development, says a University of Georgia onion expert.

Record rainfall swamped Georgia over the past three months and continues to keep things soggy in southeast Georgia, where farmers typically plant each year an estimated 12,000 acres of Georgia’s official vegetable.

“Right now, I’d say the condition of the crop is fair,” said Reid Torrance, UGA Cooperative Extension coordinator in Tattnall County and onion expert. “It’s the wettest I’ve ever seen. We’ve had record rainfall -- three to four times normal -- which has put everyone behind. We just can’t get in the fields. Basically, we’re trying to play catch up at this point.”

Farmers start transplanting onions into fields in November. Conditions were drier then. Onions planted that month had a good head start on the weather, he said. Then the sky opened, dropping 12 inches of rain in December around Tattnall and Toombs counties, where the majority of the crop is planted. Over the past 8 weeks, the region has received close to 20 inches of rain.

The crop is usually planted by the end of the year, he said. But this year, only 80 percent was in the ground by Jan. 1. The rest has trickled in during short dry spells.

Farmers are a month behind in weed management and fertilizer applications. What they’ve been able to do in fields, he said, in many cases, has been washed away.

In a few cases, Torrance has seen entire planting beds washed away, leaving the tiny bulbs once in them piled knee deep at the bottom of fields. In all, an estimated 15 percent of the planted crop is likely already lost.

If there is a silver lining, he said, foliar diseases, up to this point, haven’t been a problem for the crop. Prolonged freezing temperatures in January zapped what foliage had sprouted. So, there is nothing for diseases to attack.

The onions will be ready to hit the market in April, when harvest typically starts. “But whether it’ll be early or late April right now we don’t know,” he said.

Georgia’s climatologist David Stooksbury recently said the wet, cool weather that has blanketed the state this winter will likely continue through spring.

“We still have a lot of season left, and onions are resilient,” Torrance said. “But we’ve got to get a break here soon. Rain is the last thing we need.” 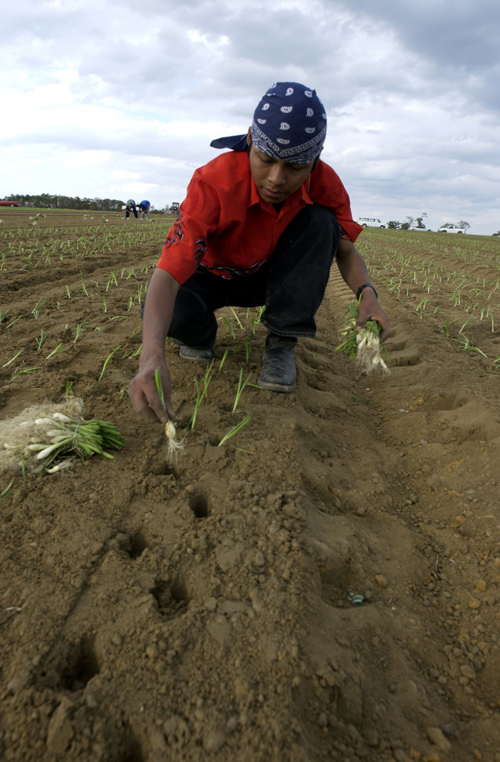