Fruit farmers have long used everything from propane heaters to sprinklers and fans to protect their produce from devastating late freezes.

As handy as they are, it’s hard to know when to deploy these systems. Ideally, farmers need frost-preventive irrigation systems running before a hard freeze affects their fruit, but turning them on too early wastes water, fuel and electricity. Turning them on too late can lead to crop loss.

Many fruit trees have already bloomed, and with this week’s temperatures projected to drop below freezing at night, a new tactic for calculating dew point could be extremely valuable.

Atmospheric scientists at the University of Georgia have recently developed a simplified set of equations to help farmers who use irrigation for frost protection predict the best time to turn on their systems, maximizing crop protection and minimizing wasted water and power. They published their findings recently in the Bulletin of the American Meteorological Society.

“This kind of information is important, especially this year, because everything is blooming so early,” said Pam Knox, agricultural climatologist with UGA Cooperative Extension. “Georgia’s blueberry farmers could see a huge loss if we have a hard freeze.”

Knox is one of the paper’s authors, along with her husband and fellow climatologist, John Knox, a professor in the UGA department of geography, and geography graduate student David Nevius.

“A few years ago, we had a freeze in April, and it was devastating to the crops,” Pam Knox said. “This year the bloom is so early that we could have a lot of problems if we have our last freeze in mid-March, which would be considered normal.”

The simplified equations allow anyone to use the dew point – a measure of humidity – and the ambient temperature to calculate the wet bulb temperature.

Wet bulb temperature measures the cooling effect of evaporation on anything that is moist. Moist fruit can cool due to evaporation off the surface of the fruit. People experience the same cooling effect when they jump out of the pool into dry air. This is also why the human body sweats to cool itself.

The exact relationship between wet bulb temperature, ambient temperature and dew point is complicated. The equations make the relationship simple for special cases, including for those situations near the freezing point, which is critical for farmers.

The goal is to turn frost protection sprinklers on at a point where the wet bulb temperature can be kept at or above 32 F. Freezing of the irrigation water releases additional heat as the water turns from liquid to solid and helps keep the air temperature at safe levels.

While farmers can readily find the temperature and dew point temperature for their farms on a number of websites, most sites don’t list a wet bulb temperature.

“If you know what the temperature and dew point are forecast to be, you can now determine when the wet bulb will reach 32 F to better decide when to turn on your frost protection system,” Pam Knox said. “That saves the farmer money in terms of energy and water, but also saves more of the crop.”

A table based on the new calculations is now available on Knox’s blog at blog.extension.uga.edu/climate, allowing farmers to easily determine when to start their irrigation for frost protection based on dew point temperature and the calculations described in the paper. 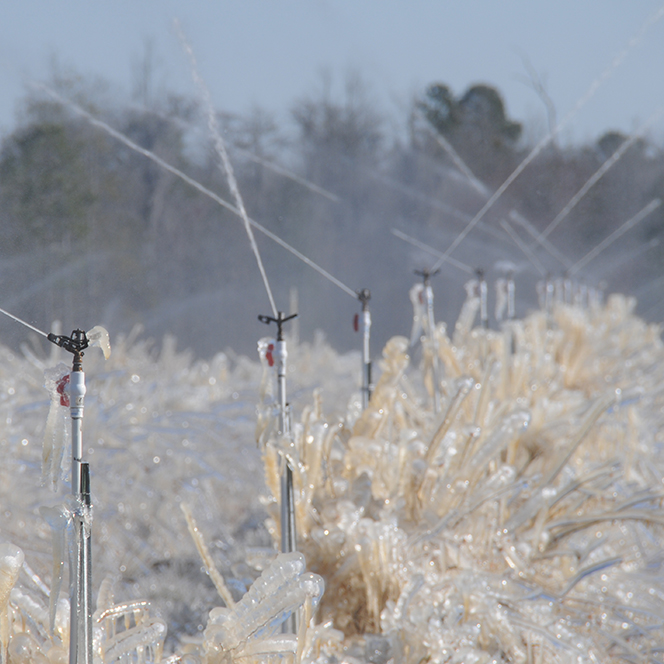