Free manure for gardens can come with weeds and pesticide residue.

Using animal manure to amend garden and landscaping soil was common practice 20 years ago. Today, University of Georgia Extension agents, like myself, discourage it.

In the past, manure was considered a great soil amendment to add to gardens and was considered a good source of natural “organic” nutrients as an alternative to synthetic fertilizers. Today, it is nearly impossible to find a manure source that doesn’t contain herbicide residues, which ironically defeats the purpose of trying to be an organic gardener.

Most backyard gardeners don’t give much thought to where their “free” manure comes from, aside from the obvious source. The vast majority of farmers spray their hayfields and pastures with herbicides to control broadleaf weeds. The same applies to hay used as mulch. Today’s hay customers expect weed-free sources of hay for their animals and farmer’s must meet the demand of their customers.

Today’s herbicides have low toxicity to humans and animals. Man of these herbicides can be sprayed one day and the animals can graze safely the next day, but the problem is many herbicides used today also have long-lasting residual activity — meaning they remain active on the mulch or in the manure after you put them into your garden.

Some commonly used products are known to last as long as 8 to 12 months in the soil or on stored hay. Herbicide residues also remain active on forage hay fed to livestock and grass clippings from sprayed lawns. If you spray your lawn for weeds, don’t put your grass clippings in your garden or compost bin. These herbicides are very good at what they do: kill broadleaf weeds without killing grass. Unfortunately, these products don’t know the difference between a weed, a flower, a tomato plant or vegetable plants growing in your garden.

The type of manure used in your garden doesn’t matter either. Whether the manure comes from horses, cattle, alpacas, goats or other livestock, there’s a chance they could have been exposed to an herbicide. Even if the livestock owner doesn’t spray his pastures, hay purchased to feed the animals could have been sprayed. More often than not, customers who buy high quality hay for animals want it to be as weed-free as possible. You can assume that any hay that is mostly weed-free has been treated with an herbicide. Alfalfa is typically the only forage hay that will not have been sprayed since most broadleaf herbicides cannot be sprayed without damaging the crop, too.

If livestock owners only feed alfalfa hay to their animals and don’t spray their pastures, the manure could safely be used in your garden. However, most livestock owners also feed grass hays such as fescue, bermudagrass and orchard grass that are likely sprayed for weeds.

Hay can be suspect, too

Before using hay from a farmer, ask if the fields were sprayed and what type of hay they feed their animals. Otherwise, assume all hay has been sprayed with an herbicide and the resulting manure will damage your garden.

If you’ve already incorporated manures or hay mulches into your garden, watch your vegetables very closely for unusual symptoms. Tomatoes are very sensitive to herbicide damage and are often the first indicator of a problem. Affected tomatoes will have extreme leaf curling and the stems will be twisted. Usually, the newest growth on the plant is the first to show these symptoms.

For assistance in identifying a plant disease or insect problem, bring a leaf sample your local UGA Extension office for assistance or call 1-800-AskUGA-1. 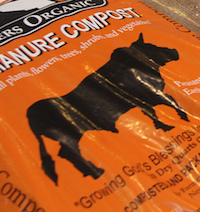