When he first came to the United States to work on a master’s degree at Virginia Tech, one of the only English words Pierre Diatta knew was “chicken.” He was relieved chicken was one of the options the flight attendant offered on the flight from Senegal.

Today, he’s working on a PhD at the University of Georgia's College of Agricultural and Environmental Sciences and helping a team of researchers understand the barriers that prevent young people from going into agriculture in his home country. The research is funded by the Feed the Future Innovation Lab for Peanut and spearheaded by agricultural economists Brad Mills of Virginia Tech and Genti Kostandini of UGA.

Agriculture is vital to the economy of Senegal, employing about 75% of workers in the West African country. But farming also is tough. Most farmers only have access to a few acres of land and most crops rely on scarce rain. Climate change is making food security even more of a concern in the Sahel region just south of the Sahara.

Diatta has studied and worked all his adult life learning from farmers and teaching them. Understanding why they do what they do is integral to helping them.

“When you are doing a survey, people see you as a hope. They are hoping that you can help them to do what they want to do or what they expect that they will have to do,” Diatta said.

In the project, “Retaining next-generation farmers in the Senegalese groundnut basin”, enumerators surveyed more than 1,000 peanut-growing households and used the latest GIS data to map all the peanut plots to explore challenges farmers face and why young people turn away from agriculture.

The work is meant to find patterns, so that policy-makers can find ways to make agriculture more attractive to the next generation. Do young people have less access to land? Are their plots farther away or less fertile? Do young women face different challenges than young men?

“After this project, I hope that we have better tools to improve the well-being of farmers,” Diatta said.

Diatta grew up in the capital city of Dakar but, like many young people, would travel during the rainy season to his family’s village to work in the field. When it came time to pursue a bachelor’s degree, he chose agricultural management because it seemed to bring together his different interests – and it came with a scholarship.

After earning a master’s degree at Virginia Tech – where he became fluent in English and helped calculate the economic loss Senegalese farmers suffered from the mango fruit fly when the pest attacked in 2016 – Diatta returned home and went to work to empower farmers. He married, had children with his wife and became a project manager for a national NGO, CARITAS.

The lure of more education brought him back to the U.S., but it wasn’t an easy decision.

“It was an intense discussion,” he said about the conversation with his wife, who works and cares for their two young children while he is away. “For my whole life, I have been in school, and I had a stable job. … But it’s only four years.”

Micro-economics also is more rigorous than he expected, Diatta joked.

He will return to Senegal with a PhD and continue to study farmers’ challenges in an effort to make their efforts more profitable and food more accessible.

“When you are dealing with international development, there is always something to explore, to understand better,” he said. “If you are doing good work and important work, you will always find something to do.” 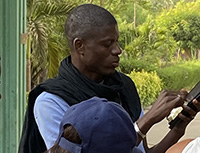