When plant breeders talk about the benefits of their work, they usually focus on the benefits to the farmers. Higher yielding varieties that can withstand abiotic and biotic stresses such as drought or diseases bring both food and income security for farmers.

But Tabitha Lomotey, who grew up in the city, talks about the consumer, how bringing more food to market makes lower prices for food insecure people who need to stretch their cash as far as they can.

“I want a future where food is very affordable even with very little money. I’m motivated to do research because that makes life easier, in terms of buying food,” she said.

Lomotey is working on a project to enhance groundnut in Eastern and Southern Africa through the Feed the Future Innovation Lab for Peanut. Originally from Accra and with a bachelor’s degree from the University of Ghana, she is working on a master’s degree at Makerere University in Uganda evaluating various groundnut lines for resistance to rust, a fungal disease that shows up in low- and mid-altitude areas in Eastern and Southern Africa.

The disease is more common in hot, wet conditions, so Lomotey’s work involved testing 20 genotypes in different locations, including at different altitudes that offer different average temperature and relative humidity.

While the results are helping to track the genetic resistance to fungal diseases, giving breeders the knowledge to make crosses that are more resistant, Lomotey found something unexpected that may give farmers a new option in the field.

“Here in Uganda, groundnuts have not been tested in the high altitudes where the temperatures are cold. … At one site, Buginyanya, we had very good yields compared to elsewhere in Uganda, even in the groundnut-growing regions,” she said.

In the trials at Buginyanya, which is 1,900 meters above sea level, plants didn’t suffer from disease, likely because of the cooler temperatures, but they did show impressive yields. At a site at even higher elevation, Kalengyere at 2450 meters – plants germinated, but didn’t grow well.

“I think this work is the first to test groundnut in the high altitudes in Uganda,” Lomotey said, but unfortunately she couldn’t return to replicate the results.

The highland trials were in 2019-2020; Lomotey couldn’t repeat them in 2020, due to the COVID-19 pandemic. Travel restrictions meant she had to work closer to Kampala, where the climate means more disease pressure from fungi anyway.

Her bachelor’s degree is in crop science, and she chose Makerere for the depth in plant breeding.

“I want to do research because I feel like that is where impact is made,” she said. “When research works well, there isn’t food insecurity. I want to use knowledge to effect that change, to make food affordable and accessible to everybody.”

“When you study plants, you understand life more. You learn science, but it also teaches you virtues. You have to be patient,” she said.  The Europe Union funded her study at Makerere University under the SCIFSA academic mobility project. 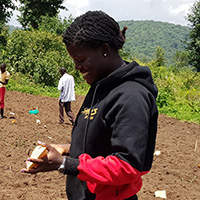