Scientists have discovered that some varieties of peanut have natural defenses against a devastating disease that completely stunts the growth of other varieties. Now, they are homing in on where those resistant peanuts store that defense – where in its genome the disease-fighting weapon lies – so that they can tap into that resistance and give subsistence farmers a way to grow a more bountiful crop with less risk.

Esther Achola has her eye on that prize.

A PhD student at Makerere University in Uganda, Achola works with the Feed the Future Innovation Lab for Peanut, headquartered at the University of Georgia, helping to map the location within peanut’s genome for resistance to groundnut rosette disease. GRD is caused by three viral agents, transmitted by aphids, a ubiquitous flying insect. By better understanding exactly where GRD resistance is within the peanut genome, breeders can quickly create varieties with different market attributes and reliance to other stresses, while also maintaining strong genetic resistance to GRD through marker-assisted breeding.

That project, Mapping GRV resistance, is headed by Josh Clevenger, a scientist who works at Hudson Alpha.

Achola initially worked on a different innovation lab project with a team of researchers led by the head of Uganda’s national groundnut breeding program, David Okello, who is screening a core collection of peanut lines across Africa for various traits. Okello’s team quickly realized that GRD resistance overshadowed all other traits they might consider; the team even had trouble replicating seed to start their trials because their field station is in a GRD hotspot and not many varieties escaped intense pressure.

“In Uganda, GRD is the most important trait due to the yield losses caused by the disease. Even though the aim was to look at genetic diversity and collect different types of agronomic data, when I planted the trials, I could not even collect any more (useful) data because GRD had ravaged the plants,” she said.

It seemed like the same struggle farmers face – unless GRD is controlled, nothing else matters. But it also made a clear challenge for Achola to find that special defense mechanism in some varieties and help empower breeders to tap into those genes in the future.

To start, Achola planted 200 lines from the collection of peanuts assembled from across Africa to look for the phenotypes that showed the most natural resistance; of those lines, only 31 had any resistance to the disease. Using the 200 lines, she did a genome wide association study (GWAS) to find what area of the genome seems to hold GRD resistance.

Another PhD student, Lutangu Makeweti, is doing similar work in Zambia, evaluating a different population to provide an even clearer picture the GRD resistance in peanut plants in Eastern and Southern Africa.

Across two seasons and at two GRD hotspots in Uganda (Serere and Nakabango), Achola evaluated the GRD prevalence and severity at four, eight and twelve weeks after planting. Using both the genotype and phenotype, she found consistent and significant SNP associations across seasons with 90% of the significant SNPs located on either Chromosome A04 or B04.

The results provide insight into the genetic architecture of GRD resistance, which will lead to the development of molecular markers for marker-assisted selection for GRD resistance.

Achola was elated by the results.

“It’s the same chromosome, but on two different sub genomes. I also found another putative gene that is from the Argonaute (protein) family, which plays a significant role in silencing (the virus’ RNA). That is the best way that the genes can respond, by stopping the viruses from multiplying,” she said.

Now, she is working with Clevenger and Damaris Odeny from ICRISAT to develop molecular marker assays to track these genes. If they succeed, peanut breeders around the world would have an easy way to test whether lines have this source of resistance without having to plant hundreds or even thousands of breeding lines in high pressure areas and hope that the disease wipes out all the bad ones. In that way, molecular markers speed up variety development and get improved varieties in farmers’ fields faster.

“I think we are really close,” she said.

Knowing where the resistance lies in the genome will also allow breeders to respond more quickly if GRD spreads beyond Africa.

“We just never know when GRD will appear in other parts of the world,” Achola said, “But I also think this is a long-lasting solution to address the constraint of GRD across sub-Saharan Africa.”

Achola has completed a large part of the research for her PhD and is writing papers and a dissertation.

Agriculture wasn’t her first choice for a career, but now she can’t imagine doing anything else. As a child in Eastern Uganda, she had experience growing food for the family, but didn’t think of agriculture as a profession.

“I grew up going to the farm helping my parents to grow cassava, groundnut, beans, potatoes, maize … just enough for us. But I grew up wanting to be a doctor, wanting to be a cardiologist,” Achola said.

A government scholarship brought her to Makerere to study agriculture, and for the first two years, she was apathetic about her choice. Then, David Okello became her mentor.

“I started my internship after my third year, and my life was never the same,” she said. “I did my internship with Dr. Okello, and he saw something in me that I didn’t see in myself.

“He was so passionate about plants; it was annoying, at first, to be honest. He talked about his plants and how he went to the field for hours to visit his plants.

“But he was making so much impact, and I started to see the entire picture. You may need a doctor a few days a year. You may need a lawyer a few other times. But you will need a farmer every day of your life.”

Ultimately, she just wanted to make someone’s life better, Achola said, and she could do that in agriculture. Working with farmers, she saw how an improved variety could increase their income and minimize risk, making every day of their lives better.

“At the end of the day, someone’s life is going to be changed. They don’t have to be sick in a hospital for you to cause an impact in their lives,” she said.

Achola isn’t sure what’s next after she completes her PhD, but is certain she’ll work with modern genetics tools to create improved plant varieties.

“Whether I am a post doc, in academia, in the public or private sector, the aim will be the same: To be able to breed varieties and get them to the farmer,” she said. 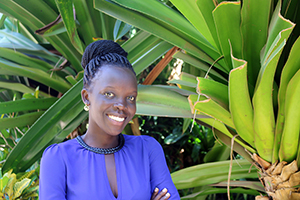