The Peanut Innovation Lab is adding another project to its portfolio, one that will help farmers in Ghana to see how improved farming practices can improve their bottom line.

The project – Modern peanut technology adoption and smallholder farmers’ welfare – is led by Anthony Baffoe-Bonnie, an assistant professor at Alcorn State University in Lorman, Mississippi. Collaborating on the project are David Jordan, a North Carolina State University professor and lead scientist on another Peanut Innovation Lab project in Ghana, as well as agricultural economist Yahaya Iddrisu and research scientist Jerry Nboyine, both with the CSIR-Savanna Agriculture Research Institute (SARI) in northern Ghana.

The project will provide the best impact assessment to date of technology introduced to Ghanaian farmers through the Peanut Innovation Lab, but also will create a partnership with a Minority Serving Institution in the U.S., a goal of the U.S. Agency for International Development. When USAID launched the Minority Serving Institutions Program early this year to encourage MSIs to work with federal research and development projects, only one project of the Peanut Innovation Lab was managed by an MSI (a time-use project in Senegal managed by the University of California at Santa Barbara. Alcorn State, the first land grant university in the U.S. for black students, is among the top historically black colleges and universities (HBCUs) in the U.S.

The new project will assess the impact farm-level interventions Peanut Innovation Lab has identified over the years and analyze how some of those enhanced production techniques work in combination improve yield and reduce contamination.

“The data will help us estimate the average treatment effect of adopting improved peanut practices on the peanut farmers' yield and income. The findings can be used to educate agricultural stakeholders such as researchers, policymakers, and extension agents, looking for ways to enhance farmers' welfare and reduce poverty in developing countries,” according to the project proposal.

Studies of improved practices in the past, though, were limited because they explored only one intervention (such as planting an improved variety) or surveyed a limited number of farmers who had agreed to try interventions for research purposes. Those on-farm experiments conducted by the Peanut Innovation Lab found that farmers make considerably more for their crop if they use improved practices, enough additional income to pay for the additional cost of the improvement.

In a survey to be conducted next year, Baffoe-Bonnie will ask 512 farmers spread across 40 communities in four peanut-growing regions of Ghana (the Northern, Savanna, Upper West and Upper East regions) about the quality and quantity of their crops, as well as what interventions they used.

The improved practices – including planting improved varieties, performing one additional weeding, using fertilizer and applying soap or oyster shells in the field – are also included in a risk tool the Peanut Innovation Lab created for Ghanaian farmers. That tool helps farmers to evaluate the risk that drought or disease will impact yield and judge whether they will recoup the cost of inputs to mitigate that risk.

Low-resource farmers require proof that an intervention is worth the investment, however.

“Farmers’ decision to adopt these improved practices depends on several factors such as the cost and benefits associated with adoption. In other words, risk-neutral farmers will adopt improved technologies if there is a high possibility that yield and income will increase, given their constraints,” Baffoe-Bonnie said in the proposal. “Given that many improved peanut practices are continuously being introduced to farmers in Ghana, it is essential to have empirical evidence of the extent of technology adoption among farmers and the impact of the technologies on farmers' welfare.”

Three goals of the project are:

Baffoe-Bonnie is an assistant professor of agricultural economics and agribusiness at Alcorn State and specializes in the impact of technology on smallholder farmers. 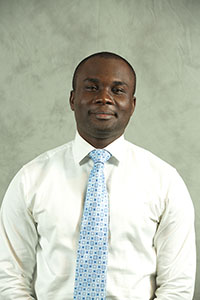