Henry Ssendagire was supposed to become a medical doctor. At least, that was his mother’s dream. She may have to settle for a doctor of virology.

Ssendagire grew up in a poor neighborhood in Kampala, Uganda, and was the first generation in his immediate family to go to college. He also didn’t have much exposure to agriculture, except for holidays, visiting family in villages.

“My parents are not learned; they are not graduates. This whole learning thing is something I’ve had to explore by myself,” he said. “But I certainly knew growing up that I was supposed to become a doctor. That was the goal I was supposed to work toward.”

With a medical degree, he could become a man of the people – helping society and making a good living for himself. He took science courses with that goal in mind, but found himself studying horticulture on a government scholarship.

Today, his research may help farmers control one of the most troublesome plant diseases that ruins groundnut yields and threatens food security.

Ssendagire is a master’s student at Makerere University working on a project through the Feed the Future Innovation Lab for Peanut to find plants that host viruses that cause groundnut rosette disease (GRD), the most destructive viral disease of groundnut in sub-Saharan Africa. The disease can complete destroy a crop, which is catastrophic for smallholder farmers.

The research project – headed by virologist Mike Deom at the University of Georgia – is working to identify the alterative hosts for the viruses that cause GRD, to find where they hang out when groundnut fields are empty. If these host plants can be identified, then removing them from areas near groundnut fields during the off season might reduce the risk of GRD. Controlling aphid populations, even if insecticides are available, is not effective, affordable or environmentally sustainable, so farmers have few tools beyond agronomic practices and resistant varieties.

“I got into agriculture by chance, but later I discovered that this is who I am. I actually was born a farmer,” Ssendagire said. “I have grown food crops in the garden, such as cabbage and maize, but I never bothered to grow groundnut, even though they are valuable in the market. The yield was just too low to attract me.”

Once he started to study groundnut and learned about GRD, he understood the problem with yield – and hoped to be part of finding an answer.

“I am getting closer to finding the alternative host for groundnut rosette disease, and when I visit farmers, I already have some advice for them. Soon, we will have complete management strategies,” he said.

Last year, Ssendagire took samples of plants and aphids from groundnut-producing areas in Uganda. While the plants themselves show symptoms of GRD – stunted plants, yellow leaves – the only way to know the reason is to look for RNA of the viruses in the plants’ tissues.

Surveying fields, he was surprised to see how many plants suffer from GRD-like symptoms, but confirming the cause means testing in the lab. After collecting 90 plant samples in one survey last year, the next challenge was preparing the samples for a PCR (polymerase chain reaction) test, which can confirm the presence of the specific viruses that cause GRD. The extraction procedure to remove RNA from one plant may not work as well in other plants, so it took some trial and error to figure out the best methods.

One of the suspected alternative hosts is Senna obtusifolia, a ubiquitous weed which is called sicklepod in the U.S. (GRD only affects plants in sub-Saharan now, but it may spread to other continents one day.) Another suspect, Solanum nigrum or black nightshade, also carries both viruses, plus the satellite RNA, that lead to GRD in groundnut.

“Since we have detected all three agents in those plants, it means we have come very close to being able to say that we have confirmed the alternative hosts of groundnut rosette disease,” Ssendagire said.

Now, he is working on vector studies to confirm whether the aphids can carry GRD from the alternative hosts back to groundnuts. In field work last year, Ssendagire collected 20 aphid samples from different agro-ecological zones in Uganda and extracted DNA. Soon, he will send the samples to be genetically sequenced so that he can compare and see how aphids in the different zones vary, which may show if some species are more likely to carry the virus.

While the research focuses on several interacting types of living things – plants, insects and viruses – Ssendagire has been most intrigued by virus and its impact.

“It so happens that I am studying viruses at a time when ‘virus’ is a common word everywhere,” he said. “People are talking about coronavirus and PCR testing, and I can say, ‘That’s what I do – just with plants.”

Ssendagire will complete his master’s degree next year and hopes to pursue a PhD in virology. 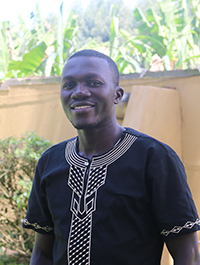