John Ruter realized at a young age that he belonged in a garden. He came to UGA in 1990 to serve as the nursery crop research specialist at the Tifton Campus after earning bachelor’s, master’s and Ph.D. degrees in horticulture from Cal Poly San Luis Obispo, the University of Tennessee and the University of Florida, respectively. He now serves as the Allan M. Armitage Professor in the College of Agricultural and Environmental Sciences, specializing in ornamental plant breeding and production.

Ruter also serves as director of the UGA Trial Gardens and was named UGA’s 2021 Inventor of the Year for the many plant varieties he’s developed over his years at the university. In this interview, Ruter talks about his passion for plant breeding and the science behind creating the types of greenery that adorn gardens and manicured landscapes across the country.

You identified your career path pretty early on. What led you to this lifelong interest in horticulture?

I grew up in San Fernando Valley, just north of Los Angeles, and I took a horticulture class in junior high school. That was my first introduction, and I found plant propagation fascinating: how seeds are dispersed, the variation you see when growing seeds, and being able to take cuttings—just taking a piece of stem off a plant—and put them in a mist system and grow a new plant.

By the time I was 14, I was working in a wholesale nursery, and then my parents moved to Ventura County during my high school years. There was a small FFA program there, so I got involved with that. Fortunately, my adviser was also trained in landscape design and was a horticulturist himself. We were a good match.

What is something that people don’t realize about professional cultivar development?

In the ornamental realm, it’s the diversity of things that you can work on. I literally work on A to Z: abutilon to zelkova. At the Trial Gardens, we’re evaluating plants for companies from all over the world; we’re really the go-to garden for heat and humidity. If people want to test a plant’s tolerance for the combination of heat and humidity, they send it to us.

I like the diversity. I get to enjoy having fun playing around with different species and trying to do interspecific hybrids. Do you get seed set? Does it germinate? When it does, what does it look like?

Also, most people don’t realize the time that’s involved. With most plants, you are looking at eight to 15 years of evaluation. Some hollies coming to market now, those crosses were made in 2011. Many of the conifers that companies are evaluating now were initially selected in 2010-12.

And with all the branded programs in the industry, they want to make sure it works for them. That adds several years to the process, because they want to take it to Minnesota and see if it’s cold hardy, and they want make sure it works in Oklahoma and Oregon and Massachusetts and Florida. I don’t think most people realize the amount of time and effort and fieldwork and lab work that goes into developing a new cultivar.

Ruter directs UGA’s Trial Gardens, a year-round nursery to dozens of new ornamental varieties. UGA is the place in the United States, he said, for testing new cultivars’ ability to withstand the high heat and humidity characteristic of Athens’ climate. Each year the Trial Gardens name a list of Plants of Distinction comprised of those varieties that perform especially well in vigor and beauty. (Photo by Dorothy Kozlowski)

How much of your job is in the nursery or the field versus in the lab?

I’d say the lab work is maybe 20% of what we do. Right now, I’m almost a full-time farmer out at the Durham Horticulture Farm in Watkinsville. I was out there with three graduate students this morning potting up some germplasm that we had irradiated in the lab.

We also do mutation breeding with gamma radiation. It’s very safe, just random busting up of the DNA, and you don’t know exactly what you’re going to get. We can also do chemical mutagenesis in the laboratory.

What kinds of resources does UGA have that enable you to do work that you perhaps wouldn’t be able to do someplace else?

First, the physical facilities, such as the farms we have within the College of Agricultural and Environmental Sciences. Down in Tifton, I had 11 acres that I was in charge of, so that gave me plenty of land to plant things out to trial. Here in Athens, we have the Durham Hort Farm that’s about 90 acres. Between greenhouses and field space, I’ve got several acres of plant evaluations out there, plus a container pad and shade houses and greenhouses, things that one needs to do this sort of work.

We also make use of UGA’s core facilities, like Georgia Electron Microscopy, which we’ve used for seed germination studies and plant identification work. We also use the Cytometry Shared Resource Laboratory in the Coverdell Center. We do a lot of flow cytometry, trying to figure out the genome size and chromosome numbers. Have we actually doubled the chromosomes? Have we gotten the triploid we’re looking for? We’re able to use that core facility to verify those things.

The other huge benefit here at UGA that allows ornamental breeding is the Cultivar Development Research Program. That allows us to get equipment, pay for workers, partially pay for graduate students, pay for supplies you need like fertilizers, irrigation tubing or for repairing your greenhouse when the plastic blows off in a storm. Ornamental breeding at UGA derives a huge benefit from that program.

And then also, at least for me, the team in Innovation Gateway is fantastic to work with. Whenever we have a company that wants to come look at things, they help set up the meetings and organize everything. From the commercialization side, the contacts they have and how they’re able to help with logistics of visitors coming to handling trial agreements and plant patents, are all very helpful.

Do you have a favorite plant or cultivar you’ve developed?

Just for being out there in the market and having success, and since I’m known as the guy who loves hollies, Emerald Colonnade® is probably one of my favorites. It’s such a useful plant in the landscape—you can grow it as a formal hedge, you can use it as a small hedge. It’s been used successfully in topiary programs, making spirals and pompoms. It doesn’t have the pest problems other hollies have because of the hybrid parentage. It was kind of my first one to hit the market, and it’s been so successful. It’s been the No. 1 broadleaf evergreen for the company that’s selling it.

Created in 1982 and nestled among the buildings of South Campus, the Trial Gardens are open to the public and periodically hold open houses for people to visit and learn more about the plants from the breeders themselves. “Most people don’t realize the time that’s involved (in cultivar development),” Ruter said. “With most plants, you are looking at eight to 15 years of evaluation.” (Photo by Peter Frey)

Is it gratifying when you come across plants you’ve developed growing out in the world, for example in nurseries or around people’s homes?

Oh yeah. One example is this new hibiscus program we have, Head Over Heels, through Star Roses. Last fall my wife and I were in the local Lowe’s, and I saw my hibiscus for the first time in marketable containers with the tags. My wife was looking at something else, and I wandered over because I saw something that caught my eye. And all of a sudden, I’m like, “Yes!” My wife says, “What is it?” And I said to her, “These are mine.” 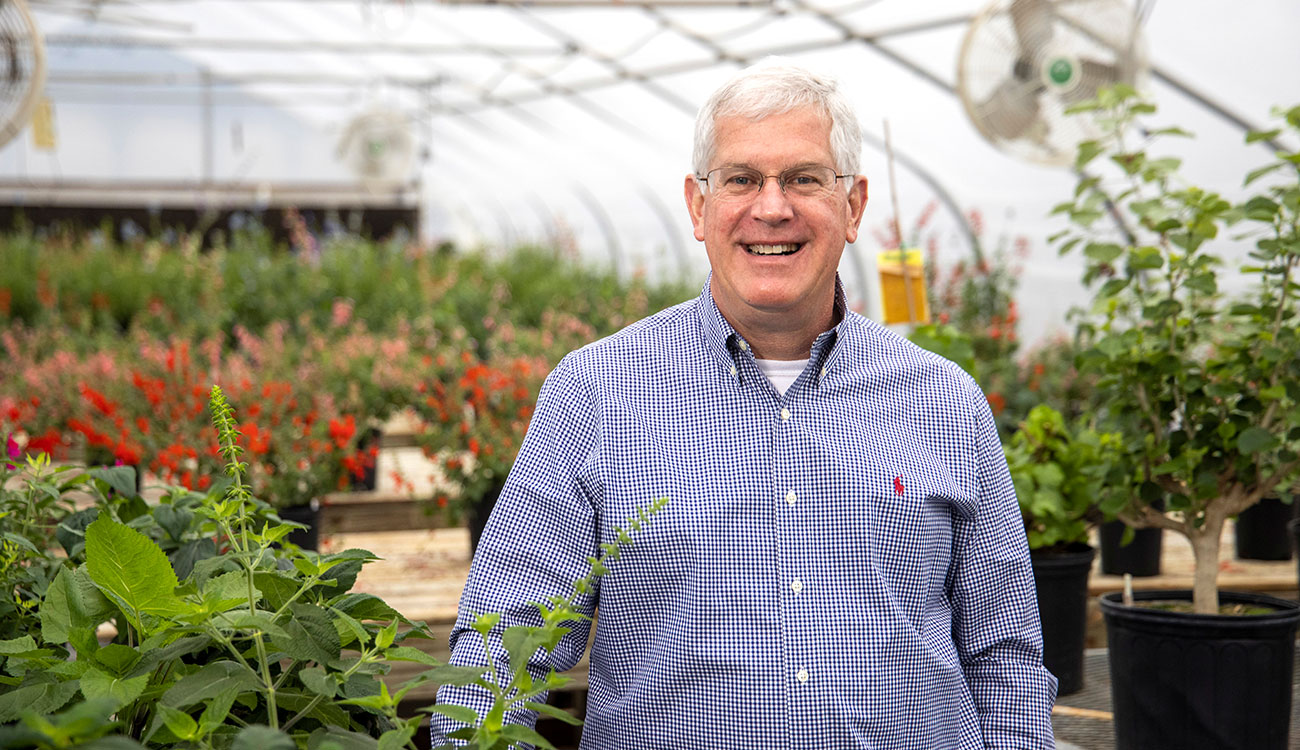