Eleven-year-old farmer finds success through passion and pride, despite challenges

Passion, a loaded tractor and a little guidance is all it took for 11-year-old Wesley Cleveland to begin following in his father and namesake Wes Cleveland’s footsteps, becoming a reliable workhand on the family farm. Most notably described as “the future of agriculture” by many in Early County, the younger Cleveland is contributing to Georgia’s nation-leading peanut crop production — and he’s doing most of it on his own.

“One of my favorite things to do is pick peanuts,” Wesley said. “I really enjoy just being able to come out to the field with my dad every day and work, especially riding the Gator.”

But this isn’t his first rodeo. While he enjoys wheeling the Gator — a small utility vehicle — around the farm, Wesley is just as adept at handling bigger equipment.

During planting season, he efficiently maneuvers around the field in his 370 horsepower John Deere 8370 R tractor, hauling harrows and laying rows for his father to plant peanut seeds. When it’s time for harvest, he flawlessly executes harvesting maneuvers without dropping a single peanut.

“He handles his responsibility very well,” said Wesley’s mother, Erin Pinkston. “He is able to complete tasks and help out his dad without any help from me or anyone else. It’s very impressive.”

Through hard work and dedication to his craft, Wesley’s efforts have already won accolades outside of family praise. He was most recently named 2021 Ag Producer of the Year and recognized at Early County’s annual Peanut Proud festival, landing him the honor of being the parade’s grand marshal.

“Being able to farm, that’s his drive,” said Brian Cresswell, University of Georgia Cooperative Extension coordinator for Early County, who presented Wesley with the award. “The combination of that drive, his added love for farming and his knowledge of operating tractors keeps him going despite many other things happening in his life.”

At age five, Wesley was diagnosed with Duchenne muscular dystrophy (DMD) — a genetic disorder that results in the progressive loss of muscle function due to the lack of dystrophin production, a vital protein that strengthens muscle fibers throughout the body.

Despite the condition, Wesley feels more empowered than ever to blaze his own path for his future.

“The only thing that changed is that I have to be more careful with what I do now,” Wesley said. “I am still able to work, and it made me feel really happy getting honored with this award.”

He continues to remain active and involved in community life, as well as keeping up with many University of Georgia athletics programs in Athens — especially football. So, when he’s not out in the field, you can find him fishing, swimming or cheering on the Georgia Bulldogs with a radiant smile.

But working on the family farm and increasing his ability to help his community remains a primary focus.

In the coming years, Wesley plans on continuing his education near his hometown so that he can continue working with his father but plans on eventually attending college to study agricultural consulting.

His message to young, aspirational farmers like him: “Keep going, no matter how hard it gets, and never give up.”

For more information on muscular dystrophy and to find ways to support the fight against it, visit mda.org. 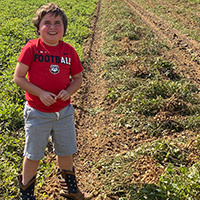 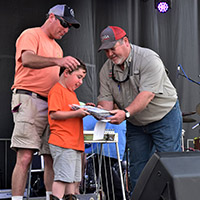 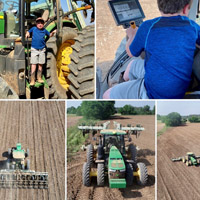