Evolution of the fastest jaws in nature: function before form in miniature trap-jaw ants

Trap-jaw ants are famous for having one of the natural world’s fastest movements, and a new study led by a University of Georgia graduate shows that the core mechanism that allows this speedy movement evolved multiple times within a single ant genus, leading to the spectacular diversification of mandible shape each time.

The ants use their fast jaws to catch their similarly fast prey, springtails, which themselves have a spring-loaded escape mechanism. The new findings may explain why the mechanism has evolved so many times independently around the world, eventually developing into the animal kingdom's fastest-accelerating resettable part.

In the study “Functional innovation promotes diversification of form in the evolution of an ultrafast trap-jaw mechanism in ants,” published March 2 in the open-access journal PLOS Biology, Doug Booher, UGA ecology graduate and honorary associate of the UGA Collection of Arthropods (UGCA) at the Georgia Museum of Natural History, Evan Economo of the Okinawa Institute of Science and Technology Graduate University, and colleagues found that the core latch-spring mechanism that drives the jaws of trap-jaw ants evolved independently seven to 10 times in a single ant genus, Strumigenys, resulting in the repeated evolution of diverse forms on different continents.

“When the miniature trap-jaw ant genus arose about 35 million years ago and slowly dispersed globally, they did not have the current trap-jaw mechanism that is now present in at least seven lineages within the Strumigenys genus of ants,” said Booher, who is currently a postdoctoral researcher at Yale. “Presently, all major biogeographic realms contain both trap-jaw and non-trap-jaw Strumigenys. It is significant that a biologically complex trait evolved independently in each biogeographic realm, resulting in species that look nearly identical in different regions but do not share common ancestors.”

Evolutionary change is marked by occasional breakthroughs in the design of organisms, often involving the reorganization of parts into new functional systems. But understanding how transitions in function evolve in multiple interacting parts remains a major challenge.

“It is a significant finding to understand how relatively small changes of the same morphological features promoted the convergent evolution in biologically complex trap-jaw mechanisms – with each trap-jaw evolution resulting in similarly extreme mandible performance. We were able to show that they are among the fastest animal movements, breaking the record for fastest acceleration,” Booher added. “The seven or more trap-jaw lineages include many ant species that are millions of years apart from sharing a common ancestor that looks completely different, without trap jaws. The result is that these trap-jaw species often look alike and occur in completely different places. If you were to look at their morphologies in a morphospace type of graph in these geographically separated areas, as shown in the study, you would see that each region fills the same morphospace.”

Booher spent more than half of his time working on the project as a postdoctoral researcher at the Georgia Museum of Natural History, specifically using the UGCA.

Joseph McHugh, curator of the UGCA and professor in the Department of Entomology at UGA’s College of Agricultural and Environmental Sciences, said Booher’s work has strengthened the collection.

“Dr. Booher has donated many ant specimens to the UGCA and has done a lot of work to curate our other ant holdings. He has helped to build an excellent research collection of the ant species that occur in Georgia,” McHugh said. Booher also donated a few “spectacular” metal ant nest castings to the UGCA, which are currently on display at the Georgia Museum of Natural History.

Established in 1936 with two specimen cases by Horace O. Lund, “the father of entomology in Georgia,” the collection has grown to include more than 1.8 million pinned specimens and more than five million mite specimens.

Booher became interested in ants while working on a bird research project for Patty Gowaty, former professor in UGA’s Odum School of Ecology, while a student at UGA.

“I was paid to do this research — to collect the insects that were in these food territories of eastern bluebirds — and I'd never really looked at insects under a microscope. As soon as I did I realized the diversity I could see underneath the microscope was so great … I knew I could study these species for the rest of my life and never know it all. That sense of discovery was kind of what drew me to ants,” he said. “Ants are a great research subject due to the fact that ants are everywhere and yet they are so morphologically diverse and behaviorally diverse. For almost any scientific system where you want to understand patterns of biodiversity from behavior to community assemblages, ants seemed to be a really good model.”

While most agree the evolution of new complex features involves sequences of gradual changes, these transitional pathways are not yet well understood. In the new study, the researchers examined the evolution of an iconic biomechanical adaptation — the latch-spring mechanism of trap-jaw ants — to address general questions about the nature and repeatability of biomechanical innovations.

The researchers reconstructed the relationships among 470 species of Strumigenys ants, and surveyed mandible mechanisms using physical examination, X-ray microtomography, 3D modeling, and high-speed videography. The researchers recorded the fastest acceleration of a resettable animal movement. In addition, the findings suggest that the trap-jaw mechanism evolved independently seven to 10 times in a single ant genus, resulting in the repeated evolution of diverse forms on different continents. The trap mechanism in each of these species facilitates a six to seven order of magnitude greater mandible acceleration relative to simpler ancestors, currently the fastest recorded acceleration of a resettable animal movement.

“When we began this study, nobody had actually looked at all the individual species as I had done. At that point I had delicately pulled the mandibles apart of hundreds of species so I could see whether or not they latched, to categorize them. Once I did that, I started seeing that there were very small differences between those that latch and those that didn’t and you couldn't tell just by identifying them by a trait such as having long mandibles,” Booher said.

Most diversification of shape — from short triangular jaws to long slender ones — occurred after the evolution of latch-spring mechanisms, which can evolve through only very minor realignments of mouthpart structures. The finding that incremental changes in form lead to a change of function, followed by large morphological reorganization around that new function, provides a model for understanding the evolution of complex biomechanical traits, as well as insights into why such innovations often happen repeatedly. Collectively, these findings move scientists toward a more general theory of how form and function change during the evolution and diversification of biomechanical systems.

As a byproduct of the research, Booher also has been able to identify at least 200 species of Strumigenys that have not been described, but that were being held in museum collections around the world, and has submitted or published studies describing 11 new species in the past year. He named his first new species Strumigenys hubbewatyorum after his advisors, Gowaty and fellow former UGA professor Stephen Hubbell.

“In the paper you’ll see in the phylogeny that there are all these species that we have given codes if they haven’t been described. Hopefully, I’ll get to describe many more in the future as we go,” he said.

For more information on the UGA Collection of Arthropods, visit site.caes.uga.edu/ugca. 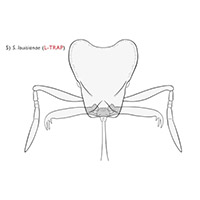